By Lucy White For The Daily Mail

Sir Richard Branson is selling a £400m stake in his space exploration business to prop up the rest of his ailing empire.

The billionaire, who has already been slammed for seeking taxpayer support to save struggling airline Virgin Atlantic, plans to sell 25m shares or 12 per cent of New York-listed Virgin Galactic.

His company Virgin Group said it would use the proceeds ‘to support its portfolio of global leisure, holiday and travel businesses that have been affected by the unprecedented impact of Covid-19’.

The final frontier: Sir Richard Branson has already been slammed for seeking taxpayer support to save struggling airline Virgin Atlantic

Virgin Atlantic, in which Branson owns a 51 per cent stake, is fighting for survival after the coronavirus pandemic caused it to cancel thousands of flights.

It has already cut 3,150 jobs and announced it will end its presence at Gatwick Airport, while its sister airline Virgin Australia has gone bust.

Branson was hoping to secure a £500m government-backed loan for Virgin Atlantic and had even offered to put his luxury Caribbean retreat Necker Island up as security against the loan.

Though talks with the Government are ongoing, the chance of securing a bailout seemed slim after Chancellor Rishi Sunak wrote to airlines and airports in March saying the taxpayer would only step in ‘as a last resort’.

A rescue package for the airline would have been politically toxic given its super-wealthy backer has not paid personal tax in the UK for 14 years after moving to the British Virgin Islands – a well-known tax haven.

Other potential investors include private equity firms Greybull Capital, which came under scrutiny for overseeing the collapse of troubled airline Monarch and British Steel, and Apollo Global Management.

Critics had called for Branson, who is estimated to be worth around £4 billion, to put in some of his own money.

His Virgin Group empire owns stakes in a slew of companies, from Virgin Wines and Virgin Money to social media giants such as Twitter and Pinterest.

Yesterday’s announcement that it would offload part of its stake in Virgin Galactic indicated Branson had succumbed to the pressure. 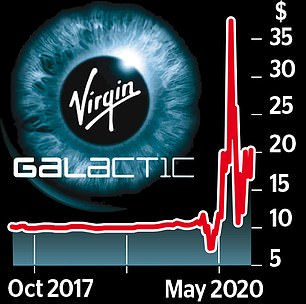 But it will mean that the entrepreneur loses his controlling stake in the space exploration company, with his ownership falling below 43 per cent. He will also have to relinquish one of Virgin Group’s three seats on the eight-strong board.

Virgin Galactic was founded by Branson in 2004 and had initially hoped to launch tourist flights into space by 2009.

But the mission has been beset by a series of delays, not least the death of copilot Michael Alsbury during a disastrous test flight of the VSS Enterprise craft in 2014.

Branson owns 115m shares in Virgin Galactic, or 55 per cent, worth around £1.9 billion before he announced his intention to sell.

Shares slid 3.7 per cent yesterday. Virgin Atlantic, which is 49 per cent owned by America’s Delta Air Lines, has lined up insolvency experts Alvarez & Marsal in case rescue talks fall through.

The airline believes it needs £750m of funding, which could be met with a mixture of private investment and cash raised by Virgin Group.

RATHBONE GLOBAL: Hunt on for stocks with ‘secret sauce’

Banks set for dividend return: NatWest and Lloyds give hope

Have absolute return funds protected investors in the market storm?