By Pete Jenson for MailOnline

Real Madrid are hoping that when Spain‘s football season restarts on June 12 the return of Marco Asensio and Eden Hazard can help them overhaul Barcelona‘s two-point lead at the top of LaLiga.

Everything about Real Madrid’s campaign before lockdown had been as good as Barcelona’s but they had scored 14 fewer goals.

With Asensio and Hazard flanking Karim Benzema, as Zidane had planned at the start of the season, there is the belief that that will not be such a problem. 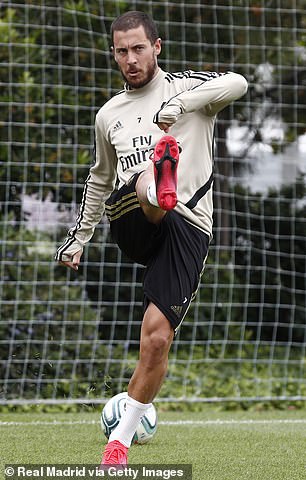 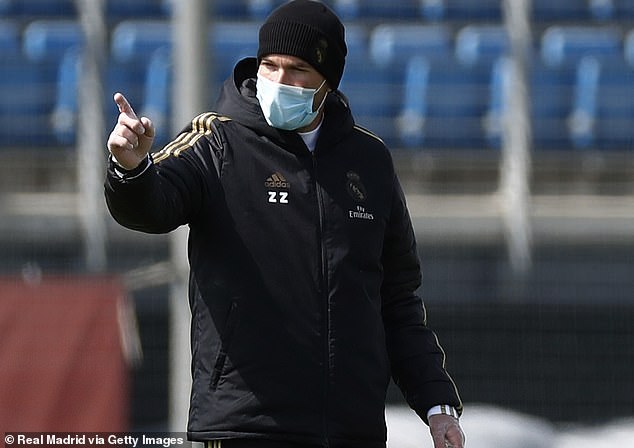 Madrid also feel their squad could be better suited to what will be a punishing 11 games in 35 days once the season restarts.

Zidane will not have to over-expose the returning Hazard and Asensio because in Gareth Bale, Vinicius, Rodrygo Goes and Lucas Vazquez he has four other options for those two positions.

Karim Benzema will need protecting because both Luka Jovic and Mariano are currently restricted to gym work because of injuries but elsewhere they look strong with Fede Valverde, Casemiro and Toni Kroos in midfield vying for a place with a rested and revitalised Luka Modric.

Barcelona also have plenty of options but there are questions over to what extent transfer speculation effects player morale.

They want Miralem Pjanic and Lautaro Martinez from Juventus and Milan respectively but they know players need to be sold or part-exchanged to make the deals happen and that has, in effect, put Arturo Vidal, Ivan Rakitic, Artur Melo and Nelson Semedo all in the transfer shop window. 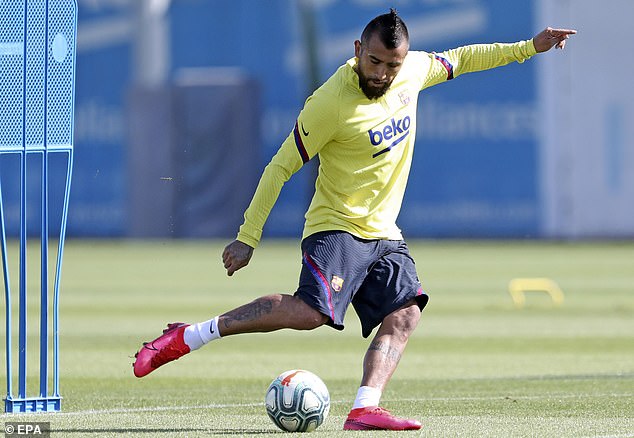 The effect on their motivation as players, who have been asked to go the extra mile with games planned every 72 hours, remains to be seen. The effect of another round of pay-cut talks will also need to be taken into consideration. Barcelona went into meltdown not long after going into lockdown back at the start of April.

The club was still reeling from the revelation a social media firm hired to monitor the internet was subsequently found to be linked to fake news against some of the players.

There were the mass-resignations of vice-presidents, Emili Rousaud and Enrique Tombas and directors Silvio Elias, Maria Teixidor, Josep Pont and Jordi Calsamiglia too. And Rousaud went on Catalan radio RAC1 to say: ‘I really believe someone has had their hand in the til.’

Barcelona threatened to sue and Rousaud later admitted regretting his outburst. All the while the board was being criticised for the way they were dealing with the necessary pay-cuts to the players.

Lionel Messi lamented on his Instagram account: ‘It never ceases to amaze us that from within the club there were those who tried to put us under the magnifying glass, adding pressure for us to do what we were always going to do anyway.’ 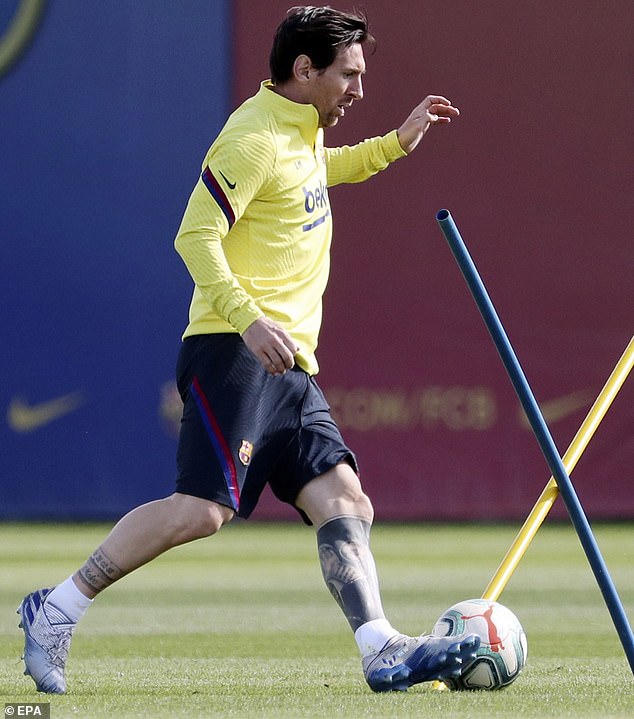 And if that barb was aimed at the president he was getting it from those who believed he was being too soft on the players whose agreement to take a pay cut only covered the period of time the country was to be in lockdown and did not offer any longer term solution.

Things have calmed down since then but there are more pay cuts on the way. There has to be. Barcelona are already on course to miss their projected one billion euro revenue target.

Madrid are heading for some similar Summer chaos. They will have 36 players in their squad next season if no one leaves and all the loanees return so someone has to move on. They also need to discuss how wage cuts will pan out into next season.

But there is not the same sense that every player has a price on their head. The institution seems calmer and if Hazard and Asensio do come back fit and on form Zidane could yet overhaul the leaders and win the one competition he wanted more than any other this season. 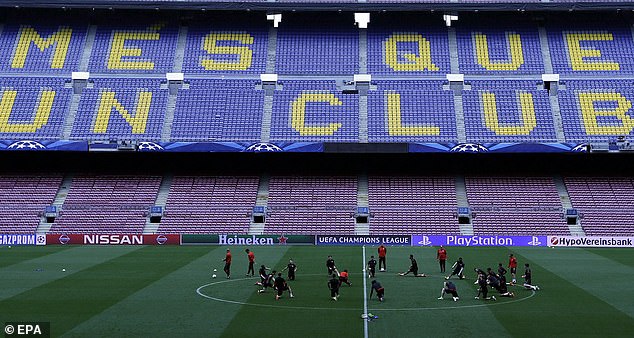 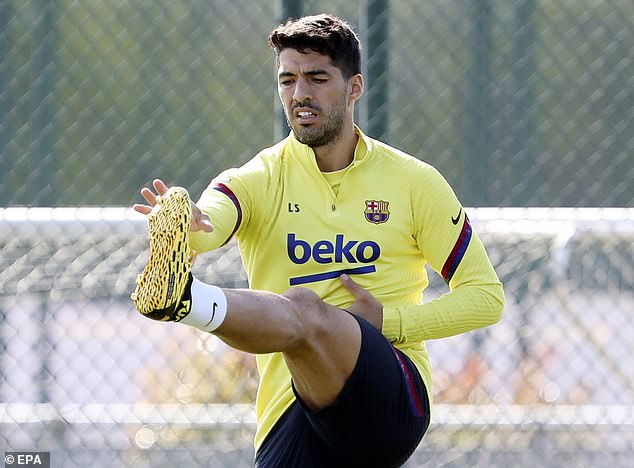 The return of Luis Suarez will be a real boost for Barcelona, who have a two point lead

The Nou Camp and Luis Suarez could be the biggest obstacles to that happening. It’s bad new for Real Madrid that Barcelona’s all-time fourth highest scorer is fit once more. And it could also work against Madrid that while they have to play their remaining fixtures in the Alfredo Di Stefano stadium of their B-team, Barca remain at the Nou Camp.

The Barcelona players have been consulted about copying Madrid and requesting that they too can play their remaining fixtures in the mini-stadium of their second string in their out of town training ground.

But the response was a unanimous ‘no’. They believe their arena still intimidates, even when empty and they feel it could give them an advantage.

It’s one they will need if club harmony is lost as it was at the start of lockdown and Hazard finishes the season in the same style he finished his campaign last year with Chelsea. 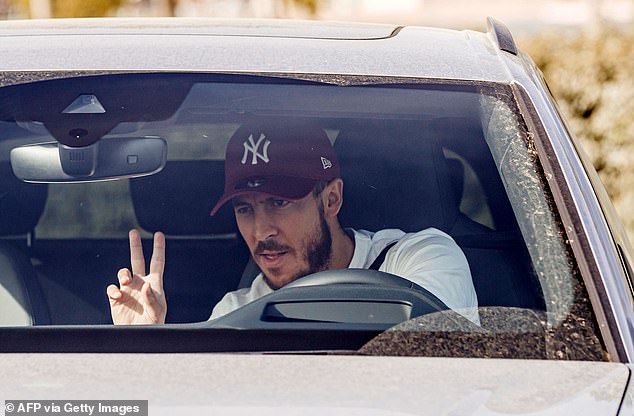 Samir Nasri ‘set to be AXED by Anderlecht after going AWOL...