Prostate deaths hit record high of 12,000 after soaring by more than a quarter in less than 20 years – while the breast cancer toll dropped by 1,600 in the same period

By Ben Spencer Medical Correspondent For The Daily Mail

Prostate cancer deaths have passed 12,000 a year for the first time.

The toll has risen by more than a quarter in less than 20 years, official figures show.

Our ageing population is the main reason, with older men more likely to develop the disease. However, the number of patients diagnosed with breast cancer has also risen – yet the number of deaths has fallen.

Experts say delays in diagnosing prostate cancer mean that, for thousands of men, the disease is only spotted when it is too late to act. Just 47 per cent of cases are diagnosed before the cancer has spread outside the prostate – the stage at which it is easiest to treat them. The government target is 75 per cent.

Another issue is lack of awareness, with men far more likely to ignore symptoms than women. However, a more fundamental problem is screening. Tests for breast cancer are routine, with middle-aged women invited for scans every three years. By contrast, tests for prostate cancer are notoriously inaccurate.

Advances in MRI scanning show huge promise, but these tests are expensive and are still being trialled. For now, men are left with the PSA blood test. This is far from accurate and may lead to a painful biopsy which can also be unreliable.

‘I’d never heard of it before my diagnosis’

Brian Harrison was only diagnosed with prostate cancer after a chat with his chemist while he waited for a prescription.

‘I said I was fine, no complaints… just that I was getting up a lot in the night to go to the loo,’ the 69-year-old grandfather recalled.

The pharmacist recognised this as a warning sign and suggested Mr Harrison should have a blood test. 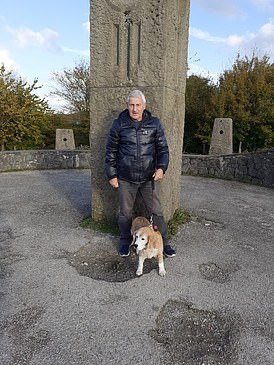 Brian Harrison is pictured above with his dog

Thankfully, after 37 sessions of radiotherapy, the retired airport worker is still here to enjoy life with wife Joanna in Birmingham.

‘I had never even heard of prostate cancer,’ he said. ‘Now I want to get the word out – men need to get checked out.’

Angela Culhane, chief executive of Prostate Cancer UK – which compiled the figures on annual death tolls from government databases – said: ‘By 2030, prostate cancer is set to be the most commonly diagnosed of all cancers in the UK. Before we reach this point, we must ensure that as many of these men as possible have their prostate cancer caught early and successfully treated.

‘The fact that deaths from the disease are still reaching record highs serves as a stark reminder of the work yet to do.’

The Daily Mail has been campaigning for more than 20 years to improve prostate cancer treatments and diagnosis. Nearly 48,000 men are now diagnosed with the disease in the UK each year. In 2018 the Government pledged an additional £75million for research, swiftly followed by another £10million in funding from the NHS.

Awareness has also risen. After the Mail relaunched its campaign in 2018, celebrities including broadcaster Bill Turnbull and Stephen Fry went public with their own diagnoses.

Mr Turnbull said: ‘Since I went public with my illness, I’ve had the opportunity to meet so many brilliant people who are doing their bit to fight prostate cancer.

‘However, more still needs to be done. We must keep up the momentum until prostate cancer is no longer a danger to thousands of men every year.’

An NHS spokesman said: ‘The survival rates for prostate cancer is now at a record high of 86 per cent – despite the NHS dealing with an ageing population and an increase in the numbers of people diagnosed.

‘Some of the latest developments in MRI scanning for prostate cancer diagnosis are already being rolled out as part of [health service] ambitions to catch three quarters of all cancers at an earlier stage, when they are easier to treat.’

WHAT IS PROSTATE CANCER?

How many people does it kill?

It means prostate cancer is behind only lung and bowel in terms of how many people it kills in Britain. In the US, the disease kills 26,000 each year.

Despite this, it receives less than half the research funding of breast cancer – while treatments for the disease are trailing at least a decade behind.

How quickly does it develop?

Prostate cancer usually develops slowly, so there may be no signs someone has it for many years, according to the NHS.

If the cancer is at an early stage and not causing symptoms, a policy of ‘watchful waiting’ or ‘active surveillance’ may be adopted.

Some patients can be cured if the disease is treated in the early stages.

But if it diagnosed at a later stage, when it has spread, then it becomes terminal and treatment revolves around relieving symptoms.

Thousands of men are put off seeking a diagnosis because of the known side effects from treatment, including erectile dysfunction.

Tests for prostate cancer are haphazard, with accurate tools only just beginning to emerge.

There is no national prostate screening programme as for years the tests have been too inaccurate.

Doctors struggle to distinguish between aggressive and less serious tumours, making it hard to decide on treatment.

Men over 50 are eligible for a ‘PSA’ blood test which gives doctors a rough idea of whether a patient is at risk.

But it is unreliable. Patients who get a positive result are usually given a biopsy which is also not foolproof.

Scientists are unsure as to what causes prostate cancer, but age, obesity and a lack of exercise are known risks.

Anyone with any concerns can speak to Prostate Cancer UK’s specialist nurses on 0800 074 8383 or visit prostatecanceruk.org

Are London’s Covid-19 hotspots linked by the UNDERGROUND?

Thousands of women’s lives are being lost to ovarian cancer because...