People who refuse to wear a face mask or comply with social distancing are more likely to have sociopath tendencies, a study has found.

Callousness, deceitfulness and manipulativeness – possible signs of a sociopath – were traits commonly found among people who broke Covid-19 safety rules.

The findings come from a survey of around 1,600 people in Brazil, which has the second highest number of reported Covid-19 cases in the world (3.8million).

The researchers said these people in society pose a risk to others, considering they still do not obey rules despite cases and deaths climbing.

It adds to research done by experts in Poland who made similar findings and said people with psychopathic or narcissistic traits may be more likely to disobey rules to stop the spread of the disease and to hoard essential items like toilet paper.

People who refuse to wear a face mask or comply with social distancing are more likely to have sociopath tendencies, a study has found. Pictured: A woman holds a sign and wears a mask as she protests in Hyde Park in central London on July 19

WHAT IS A SOCIOPATH?

A sociopath is a term used to describe someone who has antisocial personality disorder (ASPD). People with ASPD can’t understand others’ feelings.

According to the NHS, people with ASPD may:

There’s no clinical difference between a sociopath and a psychopath. These terms are both used to refer to people with ASPD and are often used interchangeably.

However, there are some key differences; sociopaths are prone to impulsive behavior and often seen as disturbed or unhinged, while a psychopath is cold and calculating, sometimes even charming and charismatic.

Professor Fabiano Koich Miguel and colleagues at Universidade Estadual de Londrina, in a city in the south of Brazil, conducted the research.

They quizzed 1,578 Brazilian adults about their compliance with Covid-19 measures.

This included asking them, ‘Do you think it is necessary to use a facemask/socially distance/wash your hands more frequently?’.

Each individual then took several personality tests online, between March and June, which saw them categorised into two groups.

The ’empathy group’ comprised of about 1,200 people, who had displayed an interest in understanding other people’s feelings and motivations.

These people also tended to be interested in ‘developing positive social interactions’ with others, The Times reported.

The second group, with about 400 people, had shown signs of antisocial personality disorder, otherwise known as being a sociopath or psychopath, with the two terms often used interchangeably.

These people tended to look for ways in which their interactions with others could benefit them personally. They were more likely to feel ‘socially detached’ and to engage in hostile behaviour.

It was these people who, the researchers said, were more likely to refuse to wear a mask or follow social distancing rules.

The difference between the groups was that those in the antisocial group had higher scores in callousness, deceitfulness, hostility, impulsivity, irresponsibility, manipulativeness and risk taking than people in the empathy group.

But those in the latter group scored higher in empathy and resonate with other people.

The researchers also divided participants into four groups according to adherence to containment measures, based on whether the person reported whether it was important.

The results showed those in the antisocial group were less likely to see Covid-19 rules as necessary, and therefore are likely less compliant. 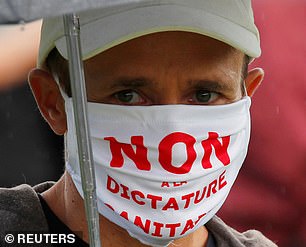 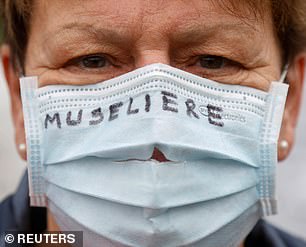 Protests against mask wearing have drawn thousands of activists globally who refuse to wear a face mask believing they have no effect, remove freedom of choice or that Covid-19 is a conspiracy. Pictured: Protestors during a demonstration against the coronavirus disease restrictions, in Paris, France, August 29 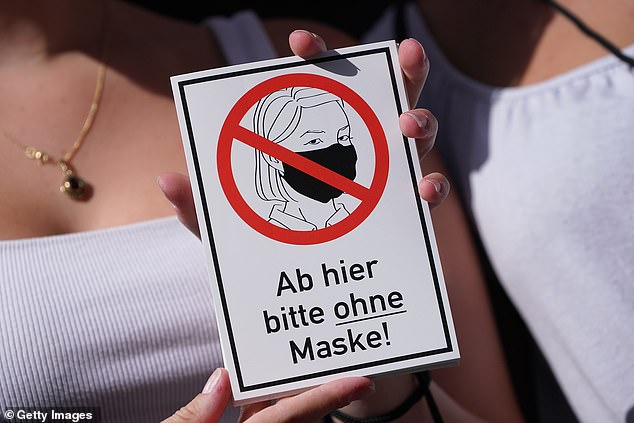 Two women hold up stickers that read: ‘From here on please without a mask!’ as they march with coronavirus skeptics on August 29, in Berlin, Germany

So, has the science evolved on face coverings?

A report by the Royal Society suggests basic homemade face coverings can reduce transmission if enough people wear them.

Dr Julian Tang, who is an associate professor of respiratory sciences at the University of Leicester, said wearing face coverings in public places could keep the R value below 1 by creating an ‘artificial herd immunity’.

But Dr Simon Clarke, an associate professor of cellular microbiology at the University of Reading, said that while face coverings may reduce the spread of cough droplets, robust epidemiological evidence on their benefits is still lacking.

Are there any benefits to wearing them?

Experts say the risk of coronavirus transmission appears to be higher in poorly ventilated indoor spaces and wearing face coverings in small shops or enclosed shopping centres could help reduce the spread.

In addition, there is also increased evidence which suggests that many people with the virus who do not have symptoms can still be contagious.

What does this mean for those looking to go back to the office?

Experts say wearing face coverings could provide an added line of defence amid growing evidence of airborne transmission of coronavirus.

Dr Tang said: ‘If half the people in the office wear a mask, it would increase artificial herd immunity to around 25 per cent, which can reduce transmission overall within the office, just by reducing the number of people who are susceptible.’

Are there downsides to face coverings?

There are many indoor spaces, such as pubs and restaurants, where the use of face coverings cannot be possible while eating and drinking.

Some experts have also shared concerns that wearing face coverings may give the wearer a false sense of security, although Prof Neal said there is ‘no evidence to suggest that is the case’.

Waterways charity Thames21 has also warned single-use masks and gloves could clog up our oceans and rivers.

Although they keep out pathogens effectively, single-use masks have a long afterlife after they are discarded, ending up in landfill or oceans.

Research shared by University College London earlier this month estimates that if every person in the UK used one single-use mask each day for a year, we would create 66,000 tons of contaminated plastic waste.

Deputy Chief Medical Officer Professor Jonathan Van Tam said in April: ‘There is no evidence that general wearing of face masks by the public who are well, effects the spread of the disease in our society.’

At around the same time, Dr Jenny Harries, a Deputy Chief Medical Officer, said masks could ‘actually trap the virus’, and cause the person wearing it to breathe it in. She explained: ‘For the average member of the public walking down a street, it is not a good idea.’

Are some face coverings better than others?

The Government said coverings can be made from scarves, bandanas or other fabric items, as long as they cover the mouth and nose.

But scientists at the Leverhulme Centre say some coverings are not as effective as others, with woven fabrics, such as scarves, shown to be least effective.

They also tended to minimise the seriousness of the pandemic, according to the findings published in the journal Personality and Individual Differences.

The researchers said overall, their findings suggest ‘adherence to containment measures is more challenging’ for people with sociopathic traits.

‘Our findings indicated that antisocial traits, especially lower levels of empathy and higher levels of callousness, deceitfulness and risk-taking, are directly associated with lower compliance with containment measures,’ the researchers wrote.

‘These traits explain, at least partially, the reason why people continue not adhering to the containment measures even with increasing numbers of cases and deaths.’

The team also concluded that those with antisocial tendencies may pose a risk to themselves and others during the pandemic.

But lead researcher Professor Miguel said that the findings had to be approached with some caution, The Times reported.

‘We cannot state that if a person chooses not to wear a facemask, the only reason is because they are a sociopath,’ he said. ‘Although this is possible, there are likely other factors involved.’

Some people do not wear masks for health and disability reasons and may carry an exemption card.

However, Professor Miguel suggested cases in Brazil are not declining because people are following the lead of President Bolsonaro, who has been sceptical about the value of wearing masks and of the coronavirus generally.

Protests against mask wearing have drawn thousands of activists globally who refuse to wear a face mask believing they have no effect, remove freedom of choice or that Covid-19 is a conspiracy.

Demonstrators descended on Hyde Park in central London on July 19 to protest the wearing of face coverings before they became compulsory in shops and supermarkets on July 24.

They raised signs reading ‘I will not be masked, tested, tracked’ and ‘no mask’ as they gathered for the Keep Britain Free march.

Psychotherapist and organiser Leah Butler-Smith told Sky News it did not make ‘any sense’ that masks were being mandated and that the Government were trying to ‘make people scared’.

The findings of the Brazilian study support two others previously published in the same journal which quizzed a collective 1,000 people from Poland.

Researchers from the University of Warsaw surveyed 755 people online between March 15 and 29, during the first month of the national lockdown.

And SWPS University of Social Sciences and Humanities in Poznan surveyed 263 people between April 14 and April 30, at the height of the crisis in Europe.

They found people with psychopathic and narcissistic personality traits are more likely to ignore coronavirus restrictions and flout mask-wearing, hand-washing, social distancing and stay-at-home measures at the height of the pandemic.

The researchers believe this is because they either don’t believe the measures work or they don’t care about what effects ignoring them might have on others.

This was because they are typically more greedy and competitive than others and have an inflated sense of entitlement, the researchers say.

Those with narcissistic personalities tend to be greedy and self-centred, and their lack of empathy means they are more likely to exploit other people.

People with psychopathic tendencies, on the other hand, may be more cruel, deceitful and manipulative while coming across superficially charming.

Most, if not all, people demonstrate some of these tendencies from time to time – but the vast majority show remorse or regret their actions.

One in 100 people display patterns of self-centered, arrogant thinking and behavior, which is diagnosed as narcissistic personality disorder (NPD). There are thought to be a similar number of people who are psychopathic.

Coronavirus cases are rising in 79% of US states and territories, CDC director warns

How to beat the winter blues: Shoppers swear by this £9.99 SAD desk lamp for boosting their mood

Revealed! Effective home workout to complete during lock down