Half of Britain’s imported coronavirus cases in June came from Pakistan, data suggests amid calls for tougher quarantine checks from ‘high-risk’ countries

As many as half of Britain’s most-recent imported coronavirus cases are believed to have come from Pakistan, it has emerged.

Since June 4, Public Health England data shows 30 people with the virus have entered Britain on flights from the Pakistan, which is believed to represent about half the total number of imported cases in that time.

There have been calls for tougher quarantine checks on arrivals from ‘high-risk’ countries.

Since March 1, 190 flights have arrived from Pakistan, which is reporting 4,000 coronavirus cases a day and has had a new spike since easing lockdown.

More than 65,000 people travelled to Britain and most are thought to have British passports, The Telegraph reported.

There have been reports of some going straight to hospital from arriving and into intensive care as up to two flights from the country arrive in Britain every day.

This week Dubai carrier Emirates suspended flights out of Pakistan after 30 passengers on a flight to Hong Kong tested positive on June 22.

Pakistan International Airlines has been flying directly into and out of the UK since early April.

At first, these were flights organised to repatriate British and Pakistani nationals but they have now resumed more regular daily flights.

A spokesman said passengers were screened with heat sensors and had to wear masks with anyone recording a high temperature prevented from boarding.

A government spokesman told The Daily Telegraph: ‘The new health measures at the border are informed by science, backed by the public and designed to keep us all safe. 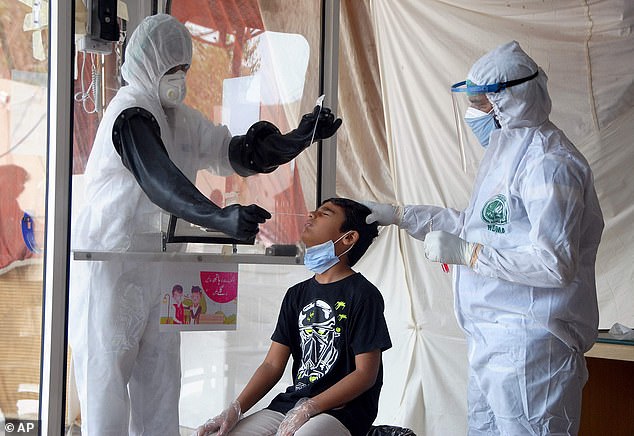 Pakistan is reporting 4,000 coronavirus cases a day and has had a new spike since easing lockdown. Health workers are pictured testing a young boy for the virus

‘We are seeing a high level of compliance and we expect this to continue as the vast majority of people will play their part to help.’

Pakistan have recorded almost 200,000 cases of the virus and nearly 4,000 deaths, according to the Johns Hopkins coronavirus resource centre.

Pakistan’s planning minister Asad Umar warned two weeks ago that Pakistan could see a million coronavirus cases by the end of July amid warnings people are ignoring rules on social distancing.

The country is home to more than 212million people. Experts say cases are expected to double to 300,000 by the end of June and reach 1.2million a month later.

Hospitals across the country say they are at or near capacity and some are turning coronavirus patients away.

When can chiropodists open?

Safety on the beach and why gyms can’t reopen: DR ELLIE CANNON answers your questions on coronavirus

Bedridden butcher, 40, pleads with doctors to amputate his leg weighing...

Doctor featured in Netflix’s ‘Pandemic’ thinks he has found a ‘cure’...