MARK CLATTENBURG: Liverpool’s first penalty against Leeds was the right decision, the word ‘deliberate’ was removed two years ago… and Graeme Souness was wrong to say Callum Wilson’s goal should have been disallowed

By Mark Clattenburg for the Daily Mail

Sportsmail columnist Mark Clattenburg has given his view on Liverpool‘s first penalty award against Leeds and Callum Wilson’s debut goal for Newcastle.

Michael Oliver was 100 per cent correct to award Liverpool’s first penalty when Mo Salah’s shot deflected off the thigh of Leeds defender Robin Koch and up onto his arm.

Let us get one thing straight – and I can’t believe people are still talking about this two years later – but the word ‘deliberate’ has been removed from the Laws of the Game.

It does not matter that Koch did not deliberately handle the ball, his arm was outstretched and in an unnatural position, it made his body bigger.

It also does not matter that the ball was deflected before hitting his arm. Koch had thrown his body at the shot and took that risk. That is why you now see a lot of defenders approaching such situations with their hands behind their back.

I see Graeme Souness was adamant Callum Wilson’s opening goal for Newcastle should have been disallowed for dangerous play – but he is wrong.

From one angle, I understand what he is saying, Wilson’s boot is high, his studs are showing and it looks like he is head-on with West Ham goalkeeper Lukasz Fabianski.

But the truest angle of the incident shows you that Wilson gets there in front of the keeper. The striker is entitled to go for that and Fabianski just isn’t quick enough.

You have to remember as well, the keeper is coming out with his fist, it is not a case of foot against head, like it would be elsewhere on the pitch. 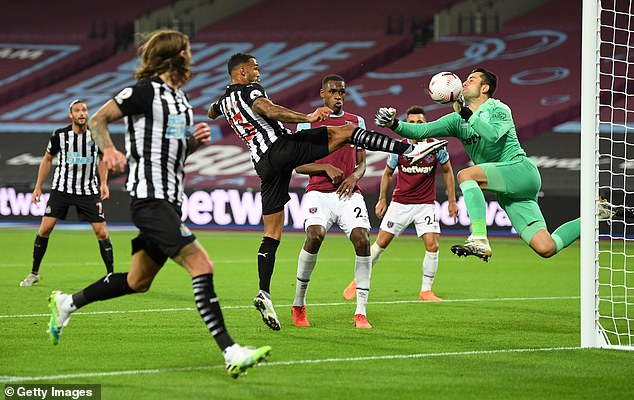 It really was not anything compared to the football a full...