Leeds and West Brom will be promoted to the Premier League if the Championship season is cancelled, with the play-offs going ahead as normal according to The Guardian.

The EFL are locked in talks about how to resume the campaign behind closed doors amid the coronavirus crisis, with League One and League Two increasingly unsure about playing to a conclusion.

Championship officials are more confident about restarting, but there is said to be a preferred contingency plan in place should that not be possible.

The Guardian claim that table-toppers Leeds and second-placed West Brom would be awarded automatic promotion to the Premier League, with the four teams currently occupying the play-off positions facing each other.

That would mean Fulham take on Preston and Brentford face Nottingham Forest, with the winners of each tie battling for the final spot in the top-flight.

The semi-finals could reportedly be played as one-off ties at a neutral venue rather than over two legs. All games would be behind closed doors with no fans.

A number of clubs, including Bristol City, Millwall, Cardiff, Blackburn and Swansea, will be in the running for a play-off spot if the season resumes as planned.

Leeds are one point above West Brom at the top, but there is a gap of six points from the Baggies to third-placed Fulham.

Meanwhile, EFL chairman Rick Parry has insisted that they remain determined to finish the season. 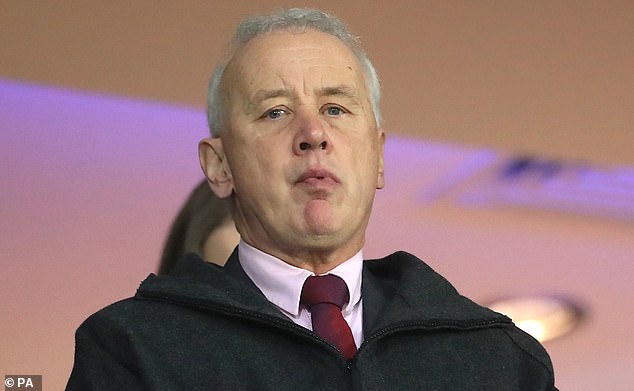 In a letter to the Football League’s Championship, Leagues One and League Two clubs, Parry confirmed the EFL ARE in talks with the government about a return date.

He said: ‘Whilst there is still no further clarity on a return of EFL matches, the objective remains to play the remaining fixtures for the 2019-20 campaign at the current 71 EFL grounds. It is important that any clubs notify the EFL of any issues that may prevent this as soon as possible.

‘Some progress has been made in respect of planning how matches may take place, with draft operational plans put before the board at this week’s meeting and incorporating many areas such as: stadium preparation, medical provisions, staffing, media access and, of course, measures needed to ensure the safety of all participants including first-team players and staff, match officials, and everyone else associated with the matchday environment.’

Police commissioner warns it is ‘inconceivable’ that football fans will stay...