The prehistoric reptiles that soared above the dinosaurs are the biggest animals ever to take to the air and they ruled the skies for 160 million years.

Despite their aeronautic excellence, these ancient flyers have largely been overlooked in the pursuit of flying technologies inspired by the natural world.

A team from the University of Bristol discovered they could help much larger unmanned devices launch without help and remain stable in flight.

Pterosaurs were experts flyers despite having a wingspans of up to 35ft – the equivalent of a small plane – and weighing more than 650lbs.

Reconstruction of the giant pterosaur Hatzegopteryx launching into the air, just after the forelimbs have left the ground. The way it lifts-off – using very strong muscles to launch from a single leap could help get drones up into the air

First author Dr Liz Martin-Silverstone, of the University of Bristol, said there is a ‘lot of really cool stuff in the fossil record’ that goes unexplored by engineers.

They ‘generally don’t look to palaeontology when thinking about inspiration for flight,’ said Martin-Silverstone.

‘If we’re only looking at modern animals for inspiration, we’re really missing a large degree of the morphology out there and ignoring a lot of options.’

WHAT CAN BE LEARNT FROM THE WAY PTEROSAURS GET IN THE AIR?

Larger birds use a run-up to gain momentum to lift-off – similar to commercial aeroplanes.

Smaller birds and insects launching into the air through a leap or jump, also known as ballistic launch.

Pterosaurs, on the other hand, may have developed a method to launch from a stationary position – despite some weighing about 660lbs.

This was down to strong muscles in the wing membrane allowing them to generate a high-powered leap off of their elbows or wrists.

Today, something like a drone requires a flat surface to launch and is quite restricted on how it actually gets into the air.

The unique launch physiology of pterosaurs might be able to help solve some of these problems’ .

The largest pterosaurs had wingspans of up to 35ft which is the equivalent to a small plane and they weighed more than 650lbs.

They should have been too big to fly, according to the Bristol team.

Unlike birds with feathered wings, they had a membrane that stretched from the end of an elongated fourth finger to their legs, more like a bat.

The flying reptiles also had internal structures called actinofibrils that provided extra strength and structural support while up in the air.

Previously, engineers have largely focused on birds and insects when designing aeronautic technology like drones and planes.

They might not think to examine fossils that – by their nature are often incomplete, said Dr Martin-Silverstone – adding that this is leaving large areas unexplored.

There are a select few pterosaur remains that provide extraordinarily deep insight into the anatomy of their wings as well as their flight capabilities.

‘There are two or three absolutely amazingly preserved pterosaur fossils that let you see the different layers within the wing membrane, giving us insight into its fibrous components,’ said Dr Martin-Silverstone.

‘Some fossils are preserved enough to show the wing attachments beneath the hip.’

‘While you don’t know exactly the shape of the wing, by knowing the membrane attachments you can model the effectiveness of different wing shapes and determine which would have performed best in natural conditions.’

Analysing the morphology and predicted flight mechanics of these ancient creatures has revealed novel tactics that don’t exist in modern flyers.

Becoming airborne is one example. Launching into the air through a leap or jump, also known as ballistic launch, is standard throughout the animal kingdom.

However, larger birds require a running start to gain enough momentum for lift-off.

Pterosaurs, on the other hand, may have developed a method to launch from a stationary position – despite some weighing about 660lbs.

Co-author Dr Mike Habib, of the Dinosaur Institute at the Natural History Museum of Los Angeles County, believes it was down to strong muscles in the wing membrane.

These allowed pterosaurs to generate a high-powered leap off of their elbows and wrists – giving them enough height to become airborne.

Dr Martin-Silverstone said: ‘Today, something like a drone requires a flat surface to launch and is quite restricted on how it actually gets into the air.

‘The unique launch physiology of pterosaurs might be able to help solve some of these problems’ as found in launching modern drones and unmanned crafts.

Pterosaurs also provide insights on how to prevent flight instability once airborne. 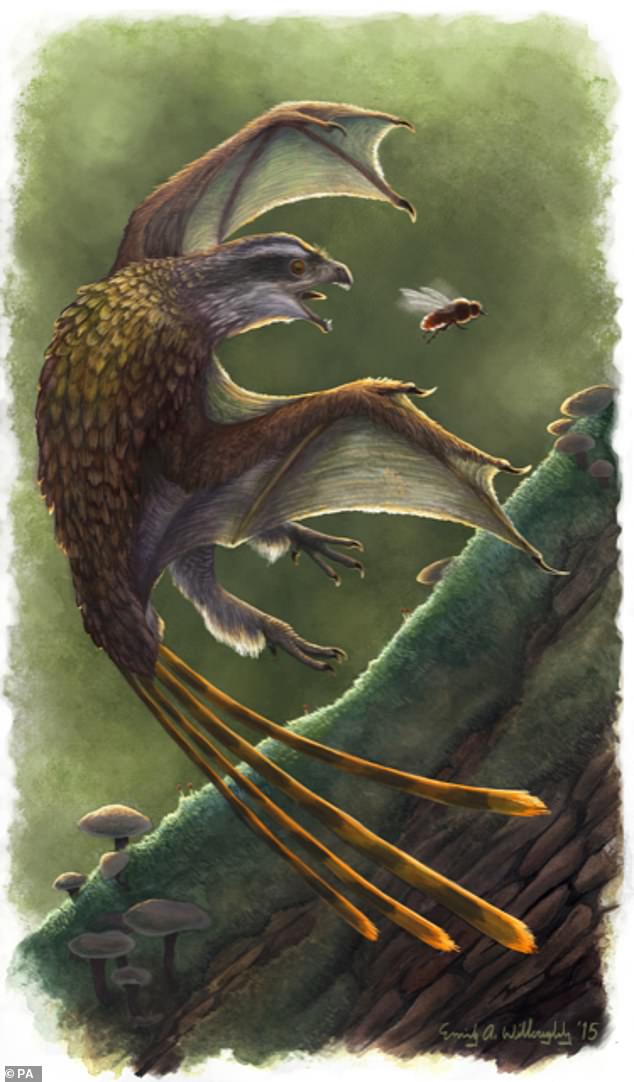 This is a reconstruction of the unusual winged dinosaur Yi qi, with a wing formed of both a bat-like membrane and feathers. Like the pterosaurs, these ancient flyers could help scientists understand more about flight and build better drones

Contrary to how sails can become unstable in a strong wind, pterosaurs evolved strategies to resist flutter of their broad wings.

‘So far we’ve struggled to design things like flight suits that can resist the pressures of flight,’ Dr Martin-Silverstone said.

‘If we can understand how pterosaurs did it, for instance by understanding how their wing membrane was actually structured, then that’s something we can use to answer modern engineering questions.’

The unique physiological elements aren’t limited to pterosaurs, either. Other ancient flyers, like Microraptor, had feathered wings on both their arms and legs.

And newly discovered dinosaur, Yi qi, had wings that combine feathers with a bat-like membrane – a body plan that has never been repeated since its extinction.

Writing in Trends in Ecology and Evolution, the researchers said many flight strategies of animals both living and dead remain to be properly explored. 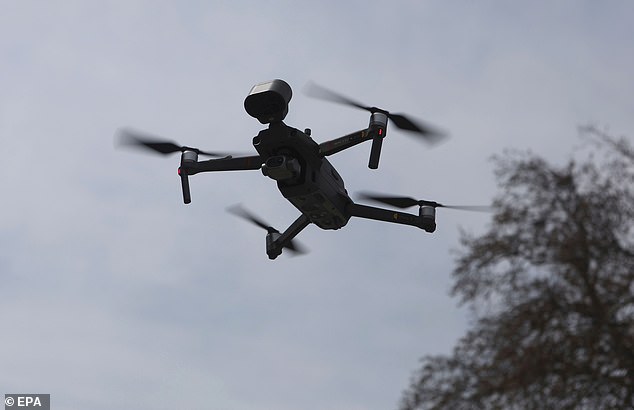 Researchers say that by studying ancient flying creatures future drone designs could incorporate some of their methods – making them larger, sturdier and more efficient

Combining our knowledge of them will give us a better chance of overcoming the hurdles still hindering man-made flight.

Pterosaurs also had a highly specialised respiratory system, similar to that of birds, with air sacs in addition to their lungs.

This is a much more effective breathing system, which is important for providing the large amounts of energy needed for flight.

Pterosaurs had air sacs in their necks and trunk, and larger creatures also had them in their wings – they would invade their bones and hollow them out making the wing bones extremely thin-walled.

Dr Martin-Silverstone said: ‘We want biologists and engineers alike to reach out to palaeontologists when they are looking to solving flight problems, as there might be something extinct that could help.

‘If we limit ourselves to looking at the modern animals, then we’re missing out on a lot of diversity that might be useful.’

The US is already testing interconnected, co-operative drones that are capable of working together to overwhelm adversaries.

Low-cost, intelligent and inspired by nature, these new machines could revolutionise future conflicts – from swarming energy sensors to spreading out over large areas for search and rescue missions.

The research has been published in the journal Trends in Ecology & Evolution.

WHAT DO WE KNOW ABOUT THE PTEROSAUR?

The pterosaur is a species of flying lizard that lived between the late triassic and late cretaceous period – about 228 to 66 million years ago.

They the earliest vertebrates known to have evolved the power of flight and their wings were formed by a membrane of skin, muscle and other tissue.

The species were split into two major types:

All Pterosaurs had coats of hair-like filaments called pycnofibres that covered their bodies and parts of their wings.

They are often referred to as ‘flying dinosaurs’ but aren’t actually dinosaurs as they don’t share a common ancestor with dinosaur species.

They were fish-eaters but also included hunters of land animals, fruit eaters and cannibals.

Remote Indian reservation near the Grand Canyon gets broadband boost