If only those Netflix cameras were stationed at Sunderland in 2007-08. Oh to be a fly on the wall for Roy Keane’s first season as a manager in the Premier League.

To see his office at their training ground – a room which he never decorated with pictures of family or footballing memories because he wanted a ‘quick getaway’ feel to his personal space.

To see him punish players after a defeat by telling them they could not use his secretary, Susan, to arrange anything for them or his reaction to losing 7-1 to Everton. 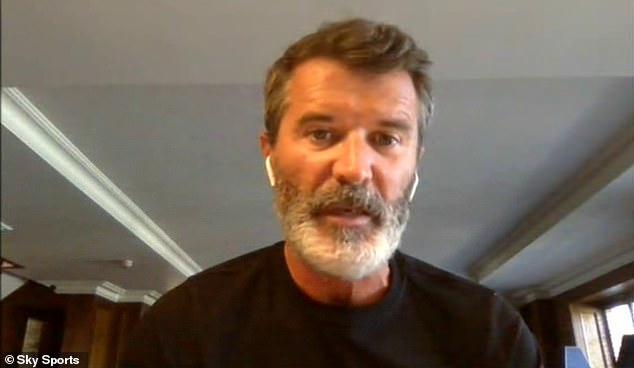 Nowadays, the Manchester United legend has forged a successful punditry career on TV

To see him tell Sunderland’s kit manager to set up the tactics board in the dressing room after a loss, just so he can boot it over in a show of disgust.

To see him explain to Jordan Henderson and Co why they should never ask an opponent for his shirt, because it makes you appear as if you’re in awe of them.

We could go on.

That remains the only full season in which Keane managed in the Premier League, before he resigned midway through the 2008-09 campaign with the side near the foot of the table.

Towards the end, it was said that Niall Quinn, the chairman of Sunderland, could only reach his manager by text message. Apparently, that was how Keane handed in his resignation. 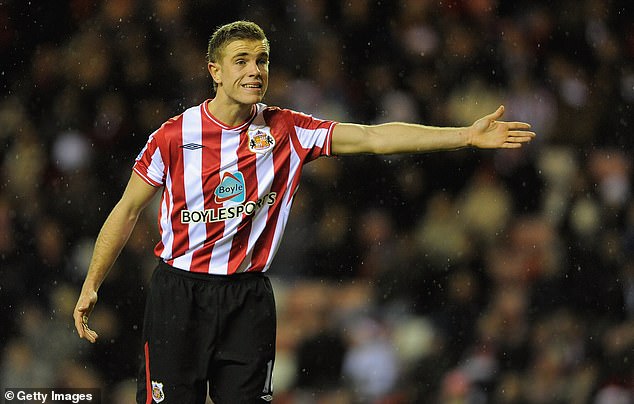 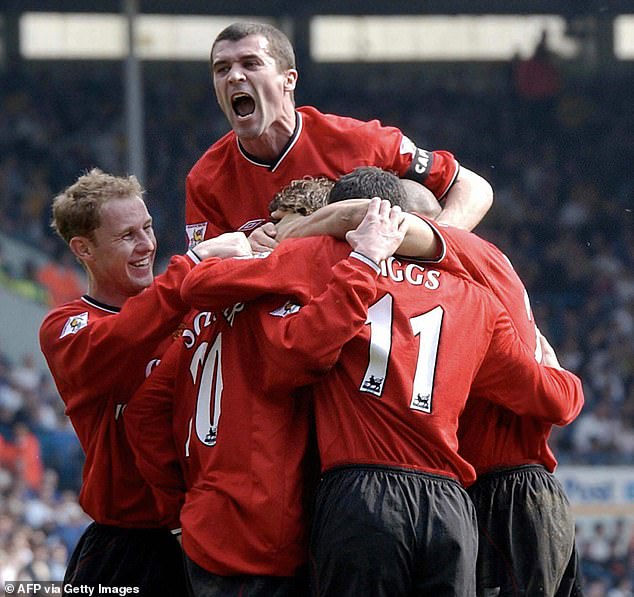 KEANE’S CAREER IN THE DUGOUT

A meeting between those two in London started with Short telling Keane he had read his book, before he wanted to know why he was still commuting from Manchester.

The former United midfielder took offence. He did rent a flat in Durham, but he did not want to move his family from Manchester, where he had lived while establishing himself as one of the Premier League’s all-time great players. Safe to say, the conversation did not end well.

There were subsequent reports that players celebrated his exit in December 2008. Supposedly they had not been keen on his harsh style of management.

Liam Lawrence can tell you a thing or two about that. Lawrence signed for Stoke the day after a falling out with Keane, which ended with the two grappling in his office.

El-Hadji Diouf was hardly a fairytale story, either. He signed for £2.6million – one of 38 players who were acquired during Keane’s two-and-a-half years in charge – and scored zero goals in 16 games. The former forward himself later described it as a ‘s***ty six months’. 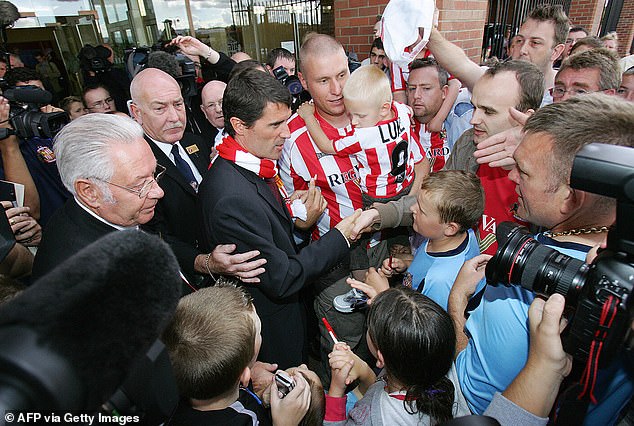 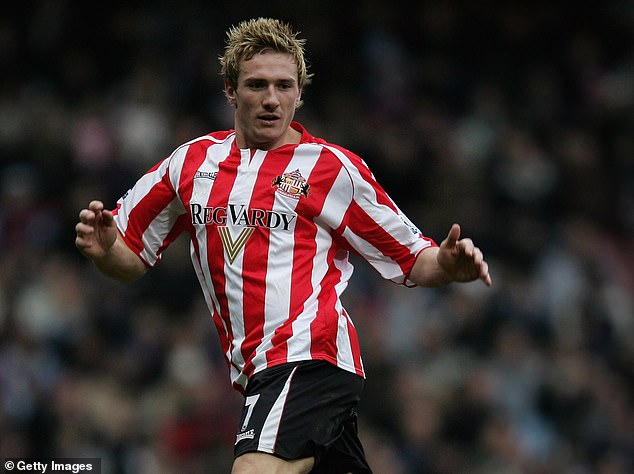 But before all of that, Keane and Sunderland shared some good times together.

That is why, after his resignation, Quinn said: ‘He lifted this place off its knees.’

Brian Clough and Sir Alex Ferguson were both unpredictable as managers and Keane wanted to create that aura, too. You can see that side to him as a Sky Sports pundit now.

It was not all about death stares and so forth.

One of his first orders, for example, was to have the groundsmen eat in the main canteen, because he deemed the hut they were using at the other end of the training ground unacceptable.

Another order, as detailed in Keane’s eye-opening autobiography The Second Half, was to have the players take charge of the music in the dressing room. 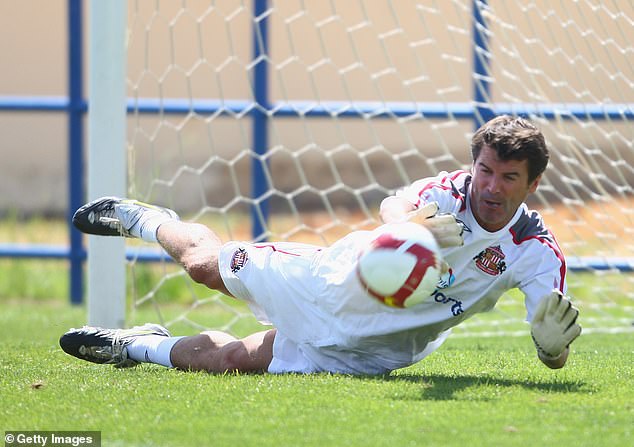 Keane, pictured trying his hand in goal at training, made plenty of big changes at the club 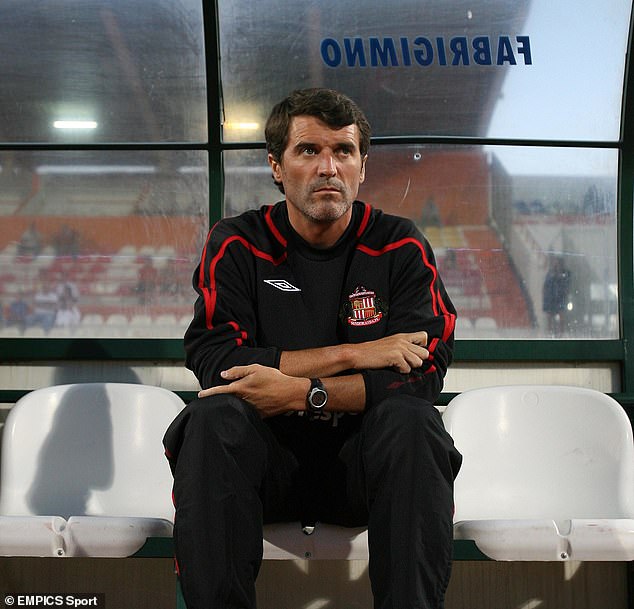 After arriving, he was stunned to realise the DJ was not a player but a member of staff. Then, before walking out at the Stadium of Light, Abba’s Dancing Queen came on.

Much to Keane’s astonishment, no one told him to ‘get that s*** off’.

‘The last song before the players went on to the pitch was Dancing Queen by Abba. They were going out to play a match, men versus men, testosterone levels were high. You’ve got to hit people at pace. F***in’ Dancing Queen. It worried me.’

That episode told him that he needed to find the leaders in this side, if they were to be successful.

They were. Sunderland wanted to be back in the Premier League and Keane got them there.

He was tactically astute enough to clinch the Championship title, even if it was awkward at first.

His very first team talk was away at Derby.

He was nervous, and started talking about the opposition goalkeeper being weak on crosses. 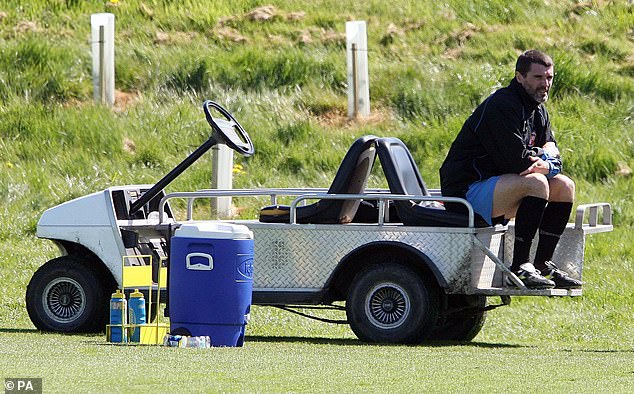 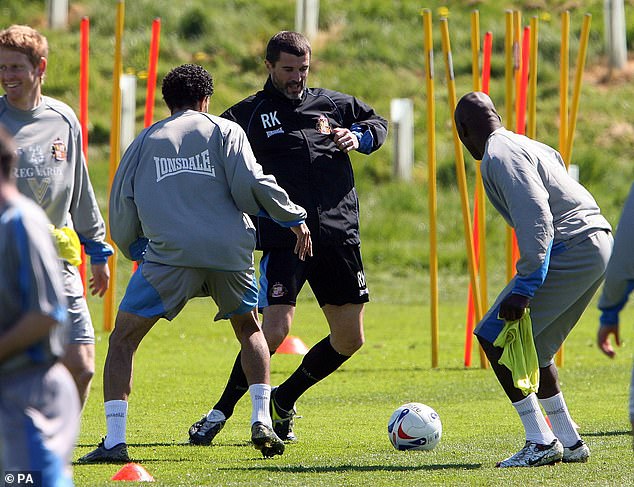 ‘The first few balls,’ Keane told his team. ‘Nail him.’ Then David Connolly, the striker, lifts his hand in the air. ‘Gaffer. You know the keeper? He was sold a week ago.’

Keane blamed the scout. But that relaxed the squad and their manager.

He got better at those team talks, and came into his own as a man-manager in 2007-08. They finished 15th in the Premier League – and survival was always the target.

Players wanted to play for him, to please him, to avoid telling-offs. Unfortunately he never saw out 2008-09, as interesting as it would have been to see where Sunderland ended up.

Keane’s only other spell in charge of a club was at Championship side Ipswich Town, where he lasted less than two years.

This was a particularly turbulent tenure, with Keane falling out bitterly with many of his players, including – but not limited to – Jon Walters, Damien Delaney, Pablo Counago, Kevin Lisbie and Ben Thatcher.

‘I don’t think I’m a bad manager, but at Ipswich I managed badly,’ admitted Keane in his autobiography. ‘I spoke to some people like something on the bottom of my shoe.’

That included his own fans, and he was eventually sacked by owner Marcus Evans after gesturing angrily towards critics in the crowd following a 1-0 home defeat to Nottingham Forest.

But was that reign doomed before Keane had even started? Speaking of Ipswich’s kit colour, Keane wrote in his book: ‘I don’t f***ing like blue. (Manchester) City were blue, Rangers were blue. My biggest rivals were blue. Is that childish? I couldn’t feel it.’

Liverpool to get £17.5m if Philippe Coutinho plays 24 more games...