Khabib Nurmagomedov has announced his shock retirement from UFC after defending his immaculate record against Justin Gaethje.

Making a speech following his second-round victory in the headline event at UFC 254, Khabib announced the news live to the cameras.

The 32-year-old was quick to thank his team but insisted he would not be returning to the UFC without his late father Abdulmanap by his side, following his passing in July after health complications caused by coronavirus. 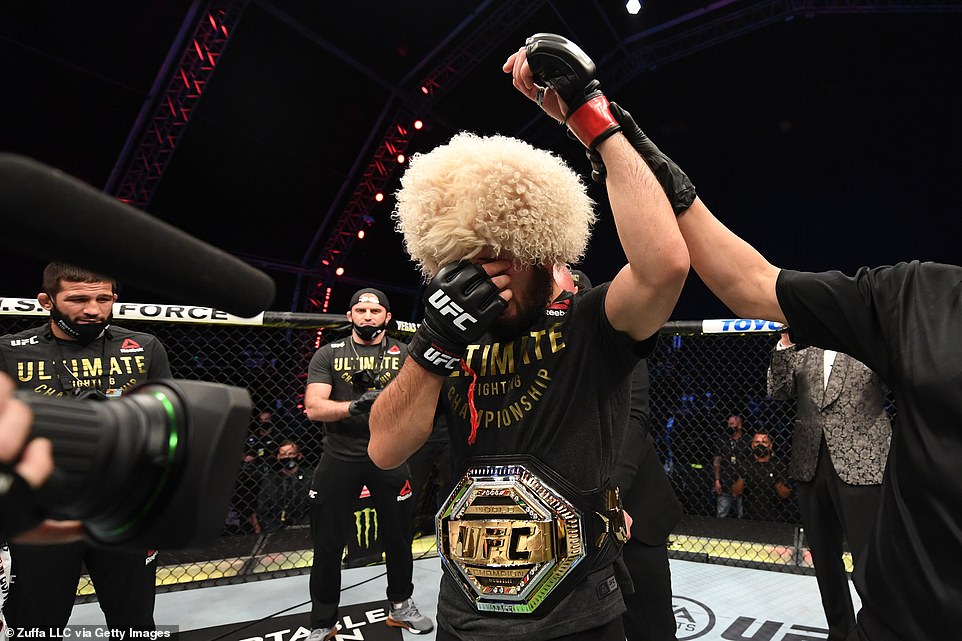 He was taken to hospital in Moscow in May, after coronavirus symptoms exacerbated an existing heart condition, with his passing understood to have deeply affected Khabib. He then gave his word to his mother that the next fight he took in the octagon would be his last.

The unbeaten star said in the immediate aftermath of his victory over Gaethje: ‘Thank you for these guys, these guys with me, been with my father for more than 10 years. All my team, AKA with coach Javier, I love him so much, all my team.

‘Today, I want to say, this was my last fight. No way am I going to come here without my father. It was first time, after what happened with my father, when UFC called me about Justin.

‘I talk with my mother three days, she don’t want that I go fight without father. I promised her, it’s going to be my last fight, and if I give my word, I have to follow this. It was my last fight here.

‘I know only one thing I want from UFC, you guys have to put me on No 1 pound-for-pound fighter in the world, because I deserve this.

‘UFC undisputed, undefeated lightweight champion, 13-0, 13 in UFC, 29 in all pro MMA career. I think I deserve it.

‘One more thing, I want to say thank you Lorenzo Fertitta, thank you Dana, Hunter, all guys. Thank you so much, and of course I don’t forget about Joe Silva who signed me here in UFC. Joe Silva, thank you. All this UFC team, everybody around the world, this whole pandemic stuff, they are doing great show. 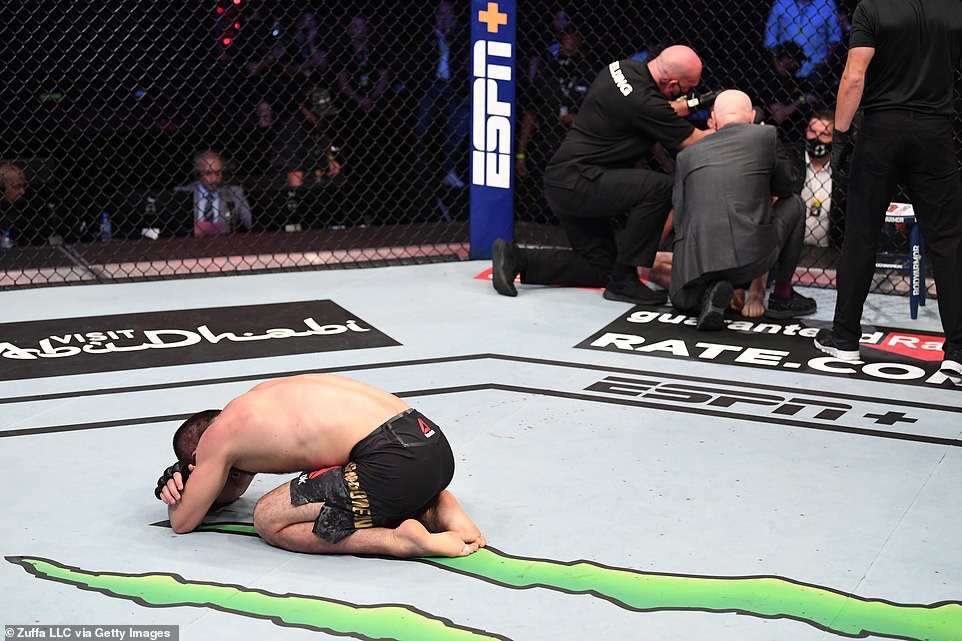 Nurmagomedov let out a flood of emotion after his win, curling up into a ball and crying after earning his 29th career victory 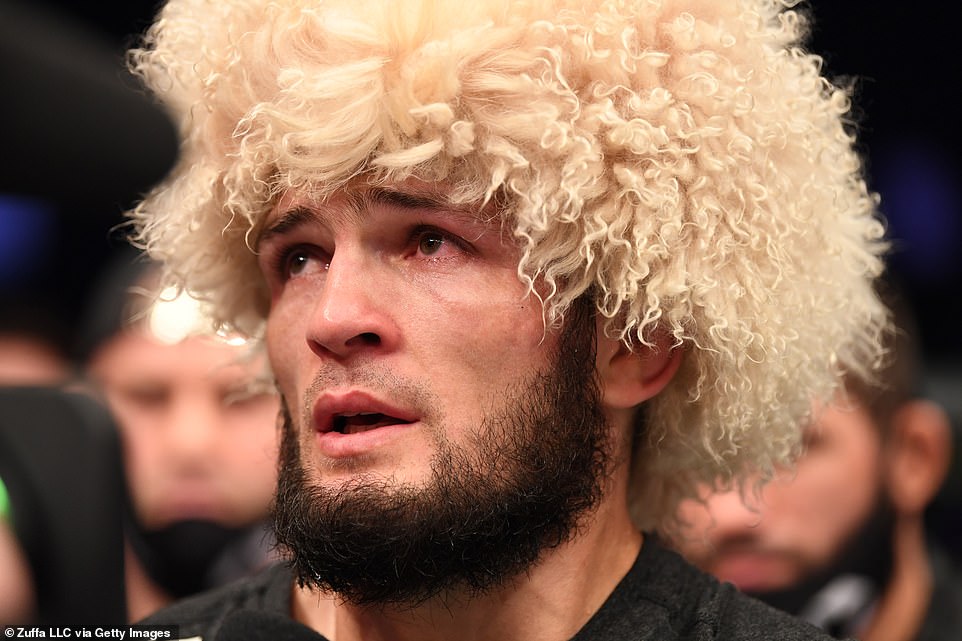 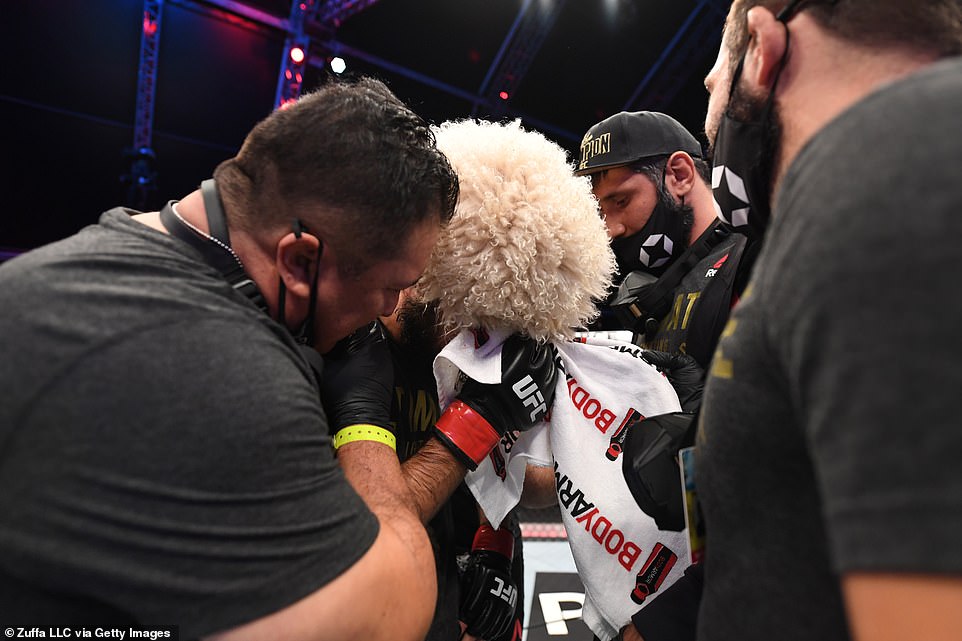 The Dagestani was consoled by his team, including Javier Mendez (L) who has been a stoic figure for the lightweight champ 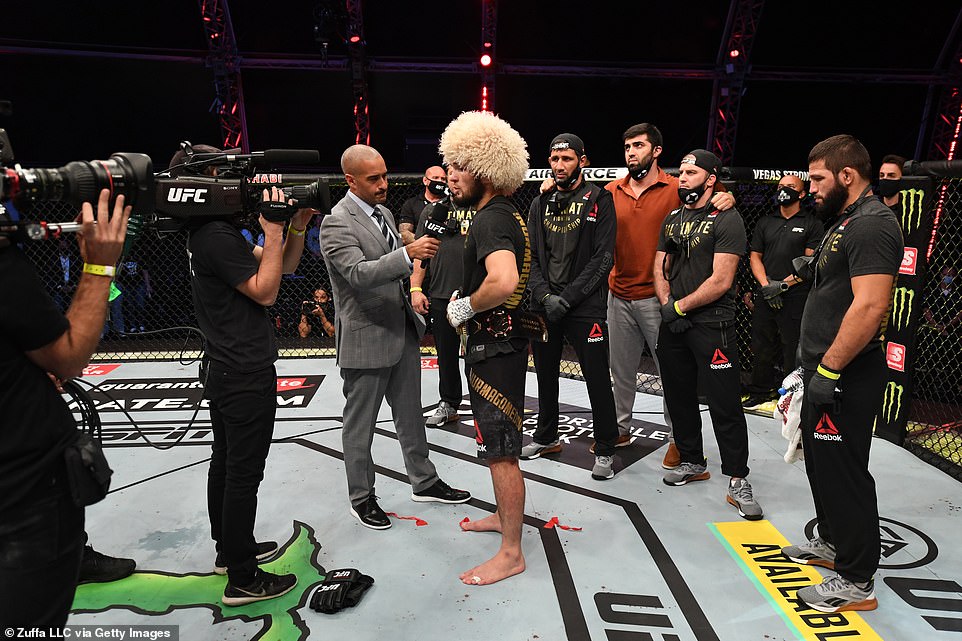 The undefeated champion told UFC commentator Jon Anik that this was his last fight, as he laid out his gloves on the canvas

‘Thank you so much Justin. Justin, 2016 I remember when I cut weight, you helped me a lot. Thank you brother. I know you are a great man, I know how you take care of your people. I know a lot of things about you, take care of your parents, because one day, it’s going to happen something. You never know what is going to happen tomorrow, you never know.

‘Today is my last fight here in UFC. It was my father’s dream. Dustin and Conor are going to fight January, I choke them out, both of them. I’m not interested in this.’

Nurmagomedov then spoke in his mother tongue, Russian, to thank his fans back home.

‘Thanks to all my Russian speaking fans. I am just a simple guy from a small town in Dagestan. I remember in 2008 when I just started or in 2012 when I just signed with UFC many people did not believe it is possible for me.

‘Now google said that I am the most talked about person in the world. I just wanted to become a champion and dreamed about that with my father. I had no idea all that fame will be on my shoulders.

The lightweight champion made his announcement in the immediate aftermath of defending his crown against Justin Gaethje to extend his unblemished record to 29 wins and zero defeats at UFC 254.

Many fans and pundits had expected the Dagestani to face his toughest challenge yet in Gaethje, who had been riding a wave of momentum after defeating Tony Ferguson at UFC 249 in May.

Moreover, question marks remained over the 32-year-old’s frame of mind following the untimely passing of his father and greatest influence, Abdulmanap, who died of coronavirus earlier this year. 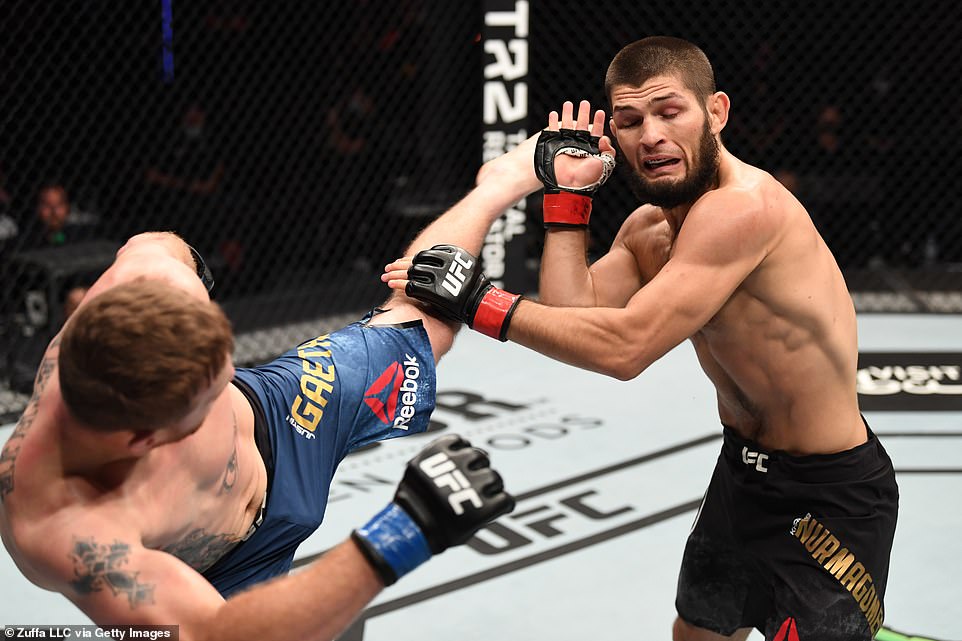 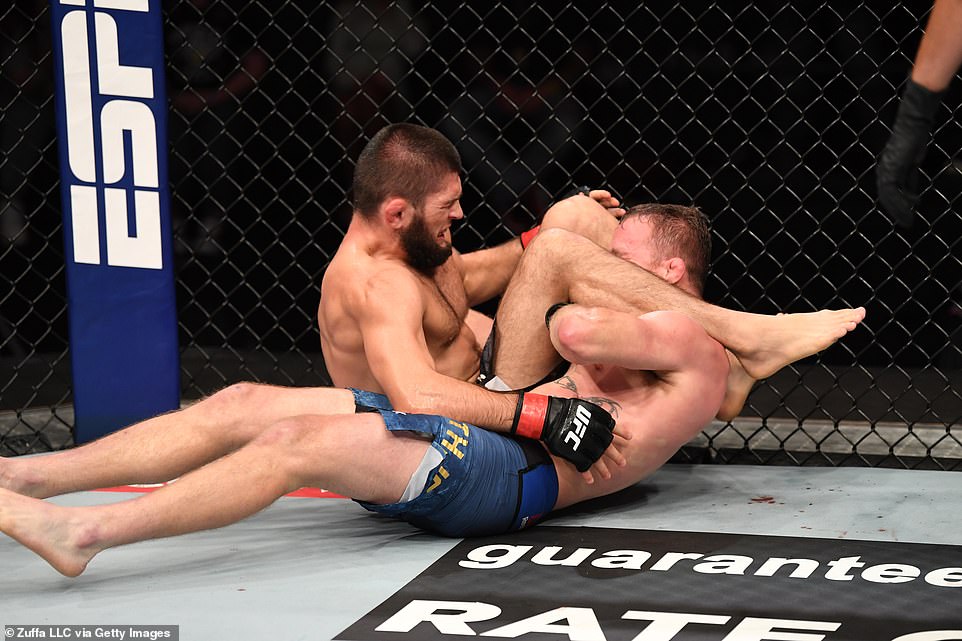 The 32-year-old secured a second-round victory over American, putting his rival in a triangle choke and forcing the tap out

But Nurmagomedov displayed his championship mettle in emphatic fashion on Fight Island, Abu Dhabi, setting a ferocious pace that kept Gaethje on the back foot for much of the opening round.

After stifling several takedown attempts, The Eagle wrestled the interim champion to the floor with 20 seconds remaining of the opening round, as the klaxon intervened to save Gaethje from an armbar attempt.

The Highlight had been enjoying success with a series of chopping leg kicks to the champion’s left leg, which required ice inbetween rounds.

However, once Nurmagomedov got Gaethje to the floor in the opening stages of the second round, the American’s chances of winning the lightweight belt vanished.

The champion sliced through Gaethje’s guard with ease and secured a triangle choke that the 31-year-old had no chance of escaping.

Gaethje tapped out and it took the referee several seconds to notice the American had waved the white flag, and once he intervened the challenger slumped to the floor unconscious.

‘I felt alive. That’s why I step in here,’ the defeated challenger said. ‘Adrenaline, endorphins released. The only reason I stuck here was to give this main his praises. He is tough, he is so strong, he has made his father so proud.

‘I fight for a living. The best thing about getting choked out is there’s nothing really consequential to your long term health. I’m ready for the next one whenever. I’m in good shape, I don’t want to get too far. So six weeks, eight weeks.’

What followed was a flood of tears from the champion, who was a ball of emotions as he crawled into a ball in the centre of the octagon that left many watchers-on reaching for the tissues.

Nurmagomedov was consoled by his team, who have been a strong foundation for the champion following Abdulmanap’s death, and he was seen removing his gloves before speaking to Jon Anik in the octagon.

Laying the gloves on the canvas, Nurmagomedov shocked the world in announcing his retirement from mixed martial arts.

The Dagestani arrived in the UFC in 2012 with a reputation as a formidable force, and fans caught a glimpse of the lightweight’s potential to dominate with his debut win over Kamal Shalorus, in which he earned victory via rear naked choke.

Victories over Gleison Tibau, Thiago Tavares, Abel Trujillo and Pat Healy saw the UFC book Nurmagomedov to face Rafael dos Anjos, a former lightweight champion. The 32-year-old dominated from start to finish over three rounds, making a huge statement of intent to the rest of the 155-pounders.

A series of long-term injuries, though, meant UFC fans did not see Nurmagomedov in action for another two years. When the Dagestani did return in 2016 against Darrell Horcher, it was a case of normal service resumed with yet another impressive victory, this time via technical knock out.

Following the win over Horcher, many were calling for Nurmagomedov to be next in line to fight for the lightweight title, held at the time by Eddie Alvarez. However, Conor McGregor got the shot ahead of the Dagestani, in what was the start of a bitter rivalry between the pair.

In the meantime, Nurmagomedov kept the unbeaten run going with dominant wins over Michael Johnson and Edson Barboza, before he finally earned his shot at the belt against Al Iaquinta, following Tony Ferguson’s withdrawal from UFC 223.

The lightweight champion idolised his father, and was left devastated by his death earlier this year 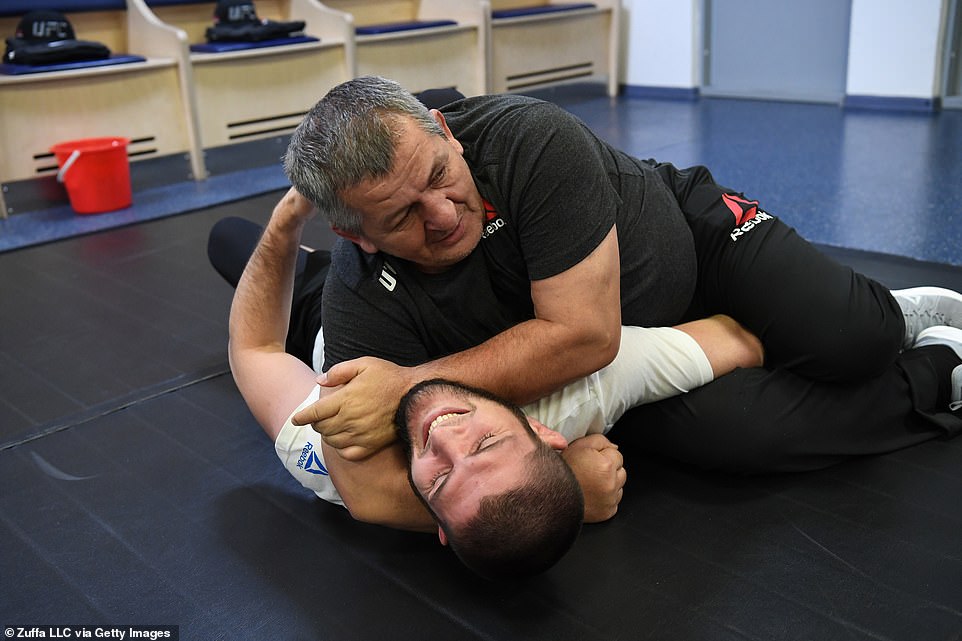 Nurmagomedov won each of the five rounds to finally get his hands on UFC gold and attention quickly turned to his first defence, against the Notorious.

There was no love lost between the pair, with ugly scenes involving the Irishman throwing a trolley in Nurmagomedov’s direction while he sat on a bus in fight week leading up to UFC 223.

But when they finally met in the octagon, there was only one winner as Nurmagomedov won every round before submitting McGregor with a choke in the fourth to comprehensively assert his dominance over the division.

Next up was interim champion Dustin Poirier, who entered UFC 242 full of confidence after dominating Gaethje to earn his shot at the throne. With Abdulmanap in his corner for the first time in the UFC, owing to visa issues preventing the MMA guru from entering the country, Nurmagomedov did not disappoint with a third-round submission of the Diamond.

There was only one name left for Khabib to beat before truly being seen as the best lightweight of all time. Tony Ferguson had been among the top lightweights for a number of years, but a bout between the pair was scheduled and fell through no fewer than five times, the latest of which – UFC 249 – was due to the Covid-19 pandemic.

Ferguson instead faced Gaethje, but was shocked as the Highlight blitzed El Cucuy to earn a fifth round TKO victory, setting up a meeting with Nurmagomedov.

The Dagestani’s win on Saturday leaves the champion with no imminent challenge, and despite wishing for a clash with Georges St-Pierre – who many feel is the true GOAT, Nurmagomedov has decided to call it quits on an incredible career.