HSBC should stop kowtowing to China: US Secretary of State joins British politicians in criticising bank for its stance on Hong Kong

By Lucy White For The Daily Mail

A top US official has blasted HSBC for its ‘corporate kowtows’ to Beijing.

HSBC and other UK firms operating in Hong Kong such as Standard Chartered have faced a backlash after publicly backing draconian new security laws imposed on the former British territory by China.

Critics including the UK and US governments say the legislation will erode freedoms and human rights in Hong Kong and tighten Beijing’s grip on the territory.

In a sign of the difficulties HSBC and others face navigating stormy political waters, Pompeo accused the bank of a ‘show of fealty’ in the face of ‘bullying’.

And he said the US stood ready to help Britain with crucial projects such as nuclear power plants and 5G.

The comments came after Beijing allegedly threatened to punish HSBC and backtrack on commitments to fund nuclear power projects in the UK, in retaliation for Boris Johnson’s decision to limit the role of Chinese telecoms firm Huawei in Britain’s 5G network.

Pompeo said: ‘The United States stands with our allies and partners against the Chinese Communist Party’s coercive bullying tactics.’

He added: ‘Beijing’s aggressive behaviour shows why countries should avoid economic over-reliance on China and should guard their critical infrastructure from Chinese Communist Party influence. 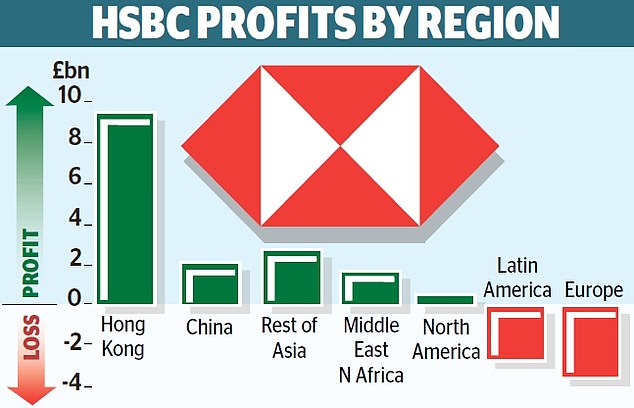 The US stands ready to assist our friends in the UK with any needs they have, from building secure and reliable nuclear power plants to developing trusted 5G solutions that protect their citizens’ privacy.

The intervention turns up the heat on HSBC, which last week backed the controversial law China is imposing on Hong Kong.

‘That show of fealty seems to have earned HSBC little respect in Beijing, which continues to use the bank’s business in China as political leverage against London,’ Pompeo said.

HSBC was set up in Hong Kong in 1865 but moved its HQ to London in the 1990s following the takeover of Midland Bank. But the bank needs to keep China on-side, as it makes the vast majority of its money in Asia.

But it must be wary of alienating the West, as it is listed in London and many investors are in Europe and the US.

Leader of the House of Commons Jacob Rees-Mogg has suggested the bank may be ‘more closely aligned to the Chinese government than Her Majesty’s Government’.

Standard Chartered faces a similar dilemma to HSBC. Just this week, shareholder Aviva Investors criticised both banks for their stance on Hong Kong.

China’s foreign ministry spokesman Hua Chunying called Pompeo ‘narrow-minded’ for assuming HSBC had been coerced. She said: ‘The world is diverse and everyone should have the right to make independent decisions.’

Gold tipped to reach $3,500 an ounce amid stock market turmoil

MARKET REPORT: Travel firms take off as Britons book trips to the Med

Director dealing: Bosses are buying shares, should you?

HMRC is ‘inundated’ with claims from employees working from home