Honey bees in the UK are increasingly suffering at the hands of a deadly viral disease that is sweeping England and Wales, according to a new study.

British scientists found colonies of the honey bee that are infected with ‘chronic bee paralysis’ rose nearly 200-fold between 2007 and 2017.

Whole colonies are frequently lost to the disease, which causes abnormal trembling, an inability to fly and a disturbing loss of hair leading to odd shiny abdomens.

The disease is caused by the chronic bee paralysis virus (CBPV), and infected bees die within a week, leading to piles of dead honey bees outside hives.

Data recorded from more than 24,000 bee keepers confirmed CBPV is present in 45 counties in England and Wales, after only being recorded in one county in 2007.

The lethal condition, which is likely spread from imports of queen bees from overseas, could threaten honey production in Britain.

Scroll down for video

While there were no cases of the viral disease in 2006, in 2017 around 174 apiaries – locations where beehives of honey bees are kept – in England and Wales had recorded cases.

Clusters of chronic CBPV where disease cases are found close together, are also becoming more frequent, the researchers report.

‘Our analysis clearly confirms that chronic bee paralysis has been emerging across England and Wales since 2007 and that apiaries owned by professional beekeepers are at greater risk of the disease,’ said Professor Giles Budge from Newcastle University’s School of Natural and Environmental Sciences.

‘We do not yet know why colonies of bee farmers are at increased risk from this damaging disease, but many management practices are know to differ significantly between amateur and professional apiarists.’ 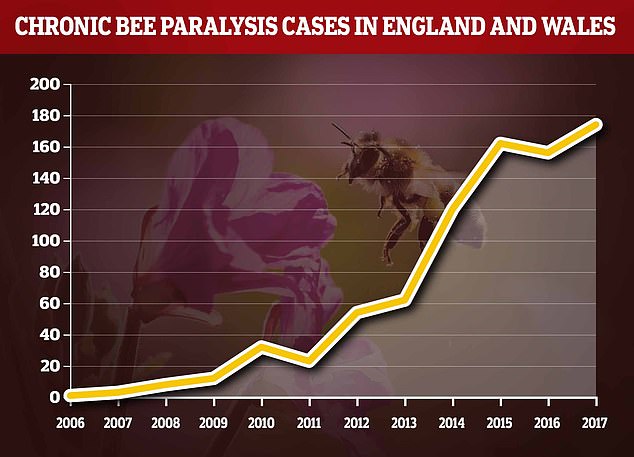 The number of honey bee colonies affected with chronic bee paralysis rose exponentially between 2007 and 2017, with 174 apiaries – locations where beehives of honey bees are kept – with recorded cases

Bees in infected hives are often found isolated and shaking in an odd jittery fashion.

When the colony is smoked they do not tend to move down between the frames as the other bees.

Abdomens lose their hair and may appear shining or greasy and swollen, with wings dislocated.

Infected honey bees can’t fly and so can also be seen crawling in front of the hives.

In crowded conditions, CBPV will spread more rapidly because bees will be in greater contact with each other.

A variation in the disease symptoms may reflect differences among individual bees in inherited susceptibility to the multiplication of the virus.

Animal pollinators such as honey bees are needed for the reproductive success of 88 per cent of flowering plants globally and contribute to the yield and quality of many crops.

The Western honey bee (Apis mellifera) is among the pollinator species facing multiple threats to their existence, including parasites, land-use intensification and exposure to chemicals used in agriculture, as well as this viral condition.

CBPV is an RNA virus that leads to mounds of dead bees outside affected colonies, which sometimes collapse or are too weakened for pollination or honey production.

Infected adult bees carry the virus for up to six days before showing symptoms, by which time they’re likely to have infected other individuals in the hive or even transmitted it to another hive when ‘robbing’ distant colonies.

CBPV has a worldwide distribution, with recent cases reported in Asia, Europe and North America, but was reported as affecting just 2 per cent of honey bees in 1966.

Since 2006, data from apiary visits have been collated into a national database called BeeBase, a government-backed website that gives the latest information on disease and pest outbreaks and lets beekepers report on colony health. 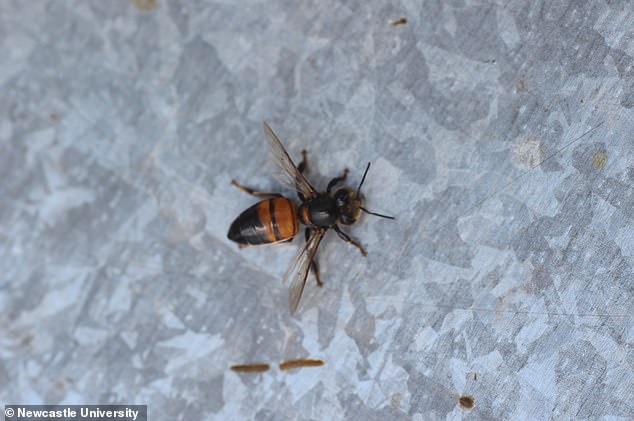 The researchers used observations of chronic bee paralysis from BeeBase to investigate the spread in English and Welsh apiaries over 12 years.

While CBPV was only recorded in Lincolnshire in 2007, by 2017 it was present in 39 of 47 English counties and six of eight Welsh counties, the team found.

The rate of increase differed between professional and amateur beekeepers, with 1.98 times more disease found in apiaries owned by professional beekeepers.

Amateur-owned apiaries had more cases because there are more apiaries owned by amateurs, Professor Budge pointed out.

There was also an increase in the number of CBVP cases regardless of whether or not apiary visits were at the request of the beekeeper.

Worryingly, CBPV was also detected in seven out of 23 colonies reported to be asymptomatic – not showing symptoms.

The study also investigated whether disease risk was associated with imports of honey bee queens, which beekeepers use to replenish their stocks.

Data from 130,000 honey bee imports from 25 countries showed that the disease was nearly twice as likely in apiaries owned by beekeepers who imported honey bees. 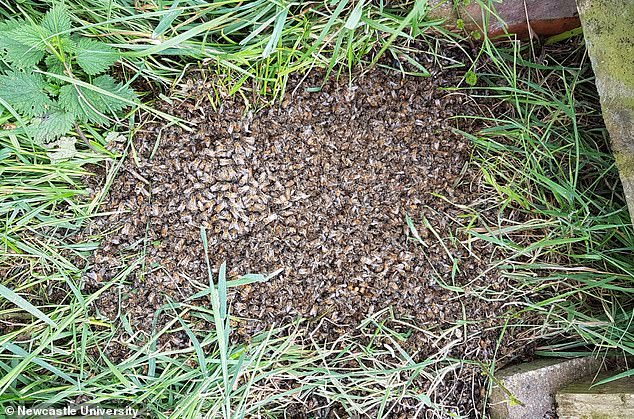 ‘UK beekeepers frequently import honey bee stocks from abroad and have done so for hundreds of years,’ the study authors write in Nature Communications.

‘Our results indicate that the level of importation of honey bees from abroad was a contributory feature to the spatial and temporal pattern of disease.’

The study was conducted with the Bee Farmers’ Association (BFA), which represents professional beekeepers in the UK.

The research team said more research is needed on the susceptibility of different honey bee races and management practices of professional an amateur bee keepers to discover the reasons for the sudden emergence of CBPV.

Further studies conduced at the University of St Andrews in Scotland will focus on different virus genotypes.