Lord’s, 1994. South Africa‘s cricketers were touring England for the first time in three decades, and Peter Hain — then the Labour MP for Neath — was making his way through the MCC members on the Saturday of the first Test for a lunchtime interview with Test Match Special.

With him was his son, Jake, who noticed a certain froideur among the blazers and bacon-and-egg ties. ‘Wow,’ he said. ‘There are a lot of guys here that still hate you.’

Unbeknown to Hain, the antipathy extended to the commentary box. Trevor Bailey, the England all-rounder turned summariser, told TMS producer Peter Baxter he didn’t want to be present when Hain arrived for his interview with Jonathan Agnew.

His crime? The pivotal role he played in the summer of 1970, the year that changed cricket and arguably the world. Aged only 20, he had drawn on the liberal instincts honed during his upbringing in apartheid South Africa, and founded the Stop The Seventy Tour (STST) campaign. To the outrage of some in the old white Commonwealth, he succeeded.

The visit that summer of the South Africa side was eventually cancelled by Harold Wilson’s Labour government and replaced by five games between England and a Rest of the World XI led by Garry Sobers and marketed as Tests (though the ICC later ruled otherwise). As The Guardian put it: ‘Hain stopped play.’

The fact that the World XI contained several players who would have appeared for South Africa — Barry Richards, Eddie Barlow, Mike Procter and the Pollocks, Graeme and Peter — did not trouble him.

‘For me it was a multi-racial side, with an Indian and Pakistanis,’ Hain tells The Mail on Sunday. ‘My objection was always that ‘South Africa’ was a misnomer: it was actually ‘White South Africa’.’

That summer marked the start of the country’s long sporting isolation. They would not play Test cricket again — nor compete at the Olympics — until 1992. There were pockets of self-interested resistance. The All Blacks visited South Africa in 1976, while rebel cricket tours continued until Mike Gatting’s ill-fated venture in 1990.

But, by and large, the world had made its point. Finally, South Africa’s National Party caved in.

Not everyone appreciated Hain’s activism, organised from his new family home in Putney, south-west London, after his parents — members of South Africa’s anti-apartheid Liberal Party — had been harassed into leaving their homeland in 1966. (They arrived the day after Labour’s landslide election victory and four months later Hain was at Wembley for the World Cup final.) 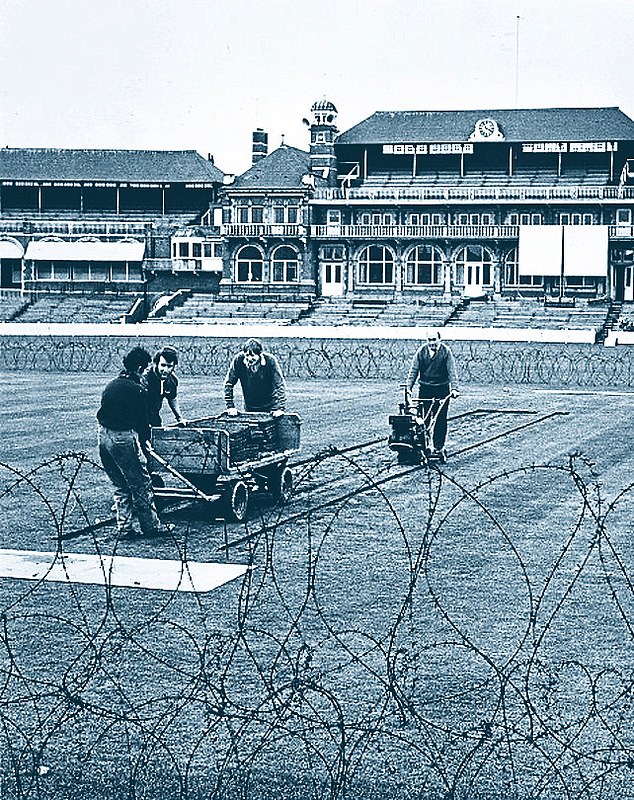 To thwart the protests, barbed wire was often put around the pitches to surround them

John Junor, long-standing editor-in-chief of the Sunday Express, would later speak for many advocates of the status quo, saying: ‘It would be a mercy for humanity if this unpleasant little creep were to be dropped into a sewerage tank. Up to his ankles. Head first.’

Hain says: ‘We were regarded as revolutionary communists and anarchists, as long-haired weirdos. We were none of those things.’

Objections to his position were mainly twofold. First, apartheid was someone else’s problem, irrelevant to modern Britain. Second, sport and politics were like oil and water, never to mix.

Fifty years on, Hain — once a prominent member of Tony Blair’s cabinet, now Baron Hain of Neath — remains unimpressed by the apologism. ‘It’s so fundamentally wrong,’ he says. ‘You can’t divorce sport from politics any more than you can divorce sport from society.

‘Politics had infiltrated every nook and cranny of cricket and rugby in South Africa.

‘In 1963, the government banned blacks from attending white sporting events. So they would shin up trees to watch. The police used Alsatians to pull them down. They’d be screaming and their legs bleeding. 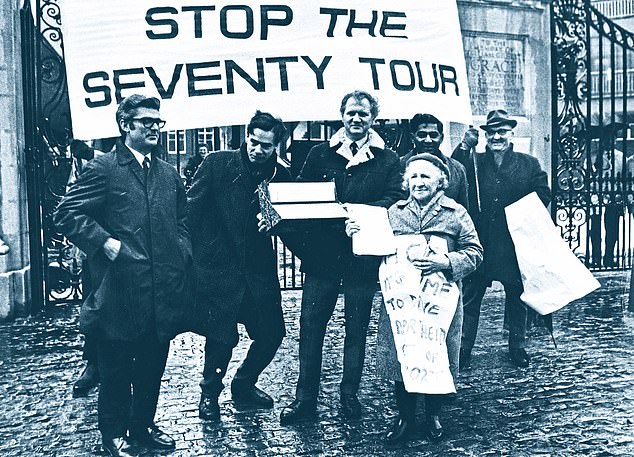 Hain had used the visit to the British Isles of South Africa’s rugby Springboks during the winter of 1969-70 as a dry run for the Stop The Seventy Tour. Activists handcuffed themselves to the goalposts at Twickenham, and violent clashes with heavy-handed police erupted at Swansea.

One night in January 1970, STST members broke in to many of the first-class cricket counties’ headquarters, leaving a trail of destruction. The car of Wilf Wooller, the Glamorgan secretary and no lover of left-wing causes, was daubed in paint. He later told Hain he wanted to see him ‘behind bars’. The mood was of mutual fear and loathing.

The protesters’ point had been made and cricket knew what was coming, though only the likes of former Test batsman David Sheppard, then the Bishop of Woolwich, and future England captain Mike Brearley backed the tour’s cancellation.

Grounds invested in barbed wire and guard dogs, and MCC — still sensitive about politics after their belated selection of the Cape Town-born, Cape-coloured, Basil D’Oliveira had triggered the cancellation of England’s tour of South Africa in 1968-69 — prepared for a fight.

So did the activists. Some had bred locusts which they planned to release on the pitch. Others carried small mirrors for dazzling batsmen from the stands. A pair of model-plane enthusiasts even intended to buzz the pitch from a flat near Lord’s, owned by their aunt.

Political conviction was the mother of invention. But, with a general election scheduled for June, it was a fight for which Wilson had no stomach. On May 22, the Cricket Council — essentially MCC — announced they had been instructed by Home Secretary Jim Callaghan to call off the tour. The rebels had won and the tapestry of apartheid began to unravel.

So how did sport succeed where political threats had failed?

‘I’m still mad about sport,’ says Hain. ‘The whole family supports Chelsea. Colleagues in cabinet used to pull my leg because I’d turn to the back pages before the front.

‘I lived and breathed sport so I knew in my DNA why it was so important.

‘Apartheid was regarded as obnoxious by the rest of the world and condemned by the UN. But apartheid-selected teams were welcomed and feted at Lord’s and Twickenham. Politically, White South Africa were polecats. But in rugby and cricket, they were treated as equals.

‘To be denied that was, both psychologically and politically, a bodyblow to apartheid-supporting whites. There were attempts by the Anti-Apartheid Movement to get arms embargoes, trade restrictions, but the sports boycott succeeded 100 per cent. 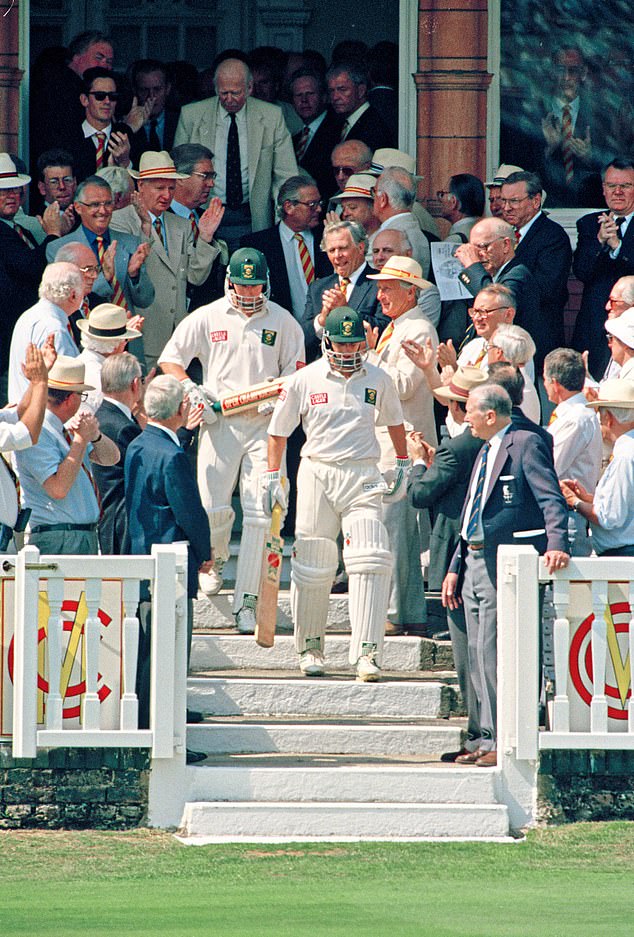 ‘I was so relieved when the tour was stopped. I wasn’t just thrilled because of the seismic blow to apartheid — I was relieved because I didn’t want the whole thing to get out of hand, as it had at Swansea where one of our guys had his jaw broken. I was committed to non-violent direct action.

‘The campaign played a big role in the dismantling of the system. It occurred at a time when resistance to apartheid had been shot down.

‘Nelson Mandela and his comrades were six years into their multi-decade sentences on Robben Island and internal resistance had been smashed and made illegal. The Liberal Party of South Africa had been banned.

‘STST was a rare victory. A few months later, South Africa were expelled from the Olympics and White South Africa never toured Britain again in rugby or cricket.’

Hain was still a teenager, possessed of what he calls a ‘fearless innocence’, when he was appointed press officer and chairman of the STST campaign in October 1969. 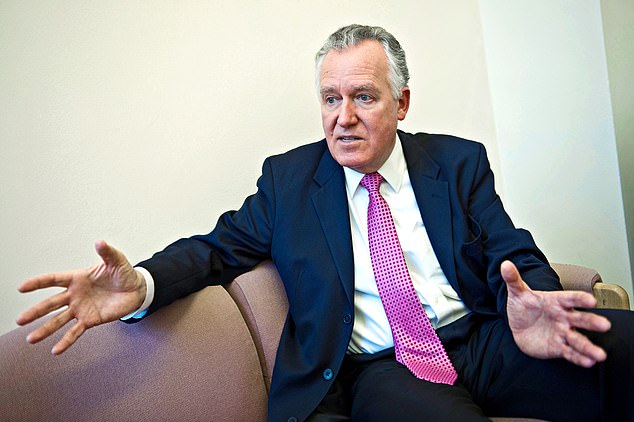 It stood him in good stead for a career in politics that has included roles as Secretary of State for both Northern Ireland and Wales. In 2015, he was elected to the House of Lords.

Yet his contribution to the summer of 1970 remains prominent on his CV. ‘There’s only one thing that has made me more proud,’ he says, ‘and that was my part in the settlement that brought Ian Paisley and Martin McGuinness around the table for the Northern Ireland agreement in 2007.

‘When Mandela got out of prison in 1990, there was a big sea change in attitudes towards me in the UK. People would cross the road or stop me on the Tube or when I was shopping to say: ‘I hated you in 1970, but now we recognise why you did it’.’

October will see the publication of his latest book, Pitch Battles, about the history of sport and racism in South Africa. There should be plenty of takers.

Hand sanitisers every 20 meters and a ban on showers: How...