Fifteen minutes is enough time for a team’s play-off chances to be completely ruined as West Brom found out on Saturday. One up all the way to the 75th minute after Dwight Gayle’s opener only for it all to fall apart and leave them without much hope or Gayle himself.

First came Conor Hourihane’s equaliser before Tammy Abraham converted a penalty – Jack Grealish playing his part in both: Gayle was then sent off for a second yellow card when he slid in on Villa goalkeeper Jed Steer.

Tuesday night at the Hawthorns promises more drama and excitement but now we have a much better idea as to who will make it to Wembley later this month. 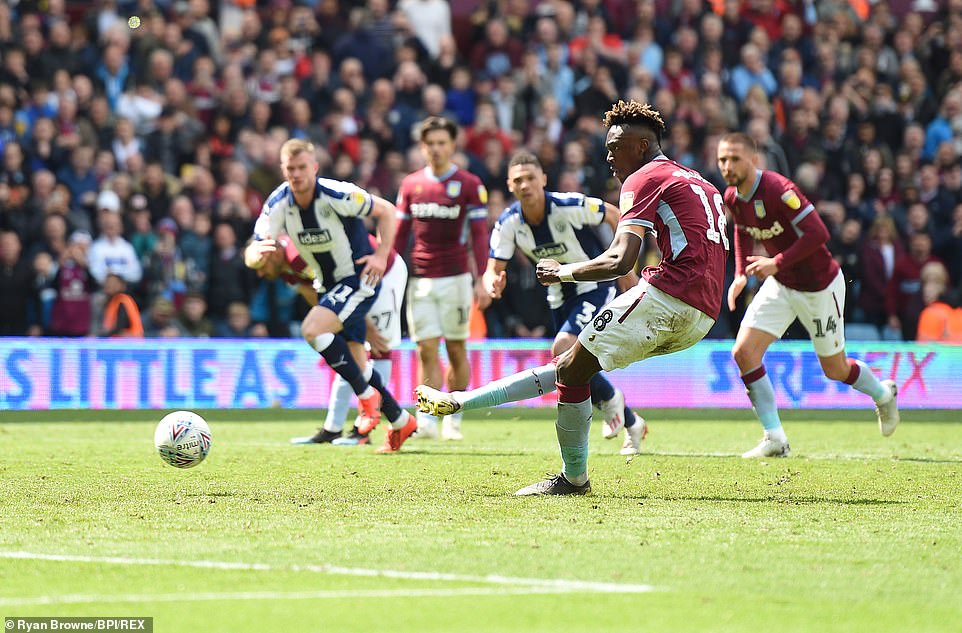 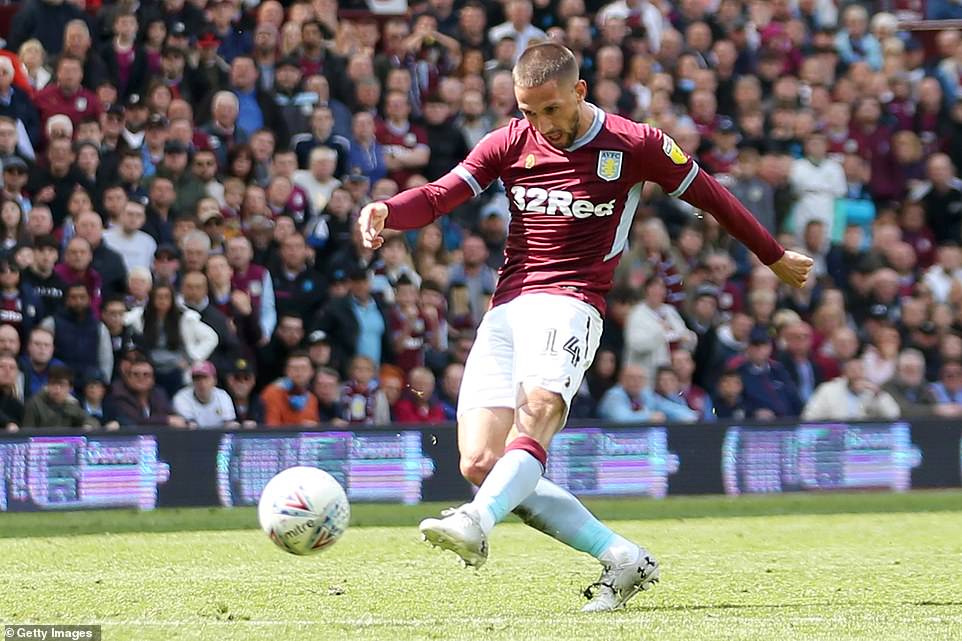 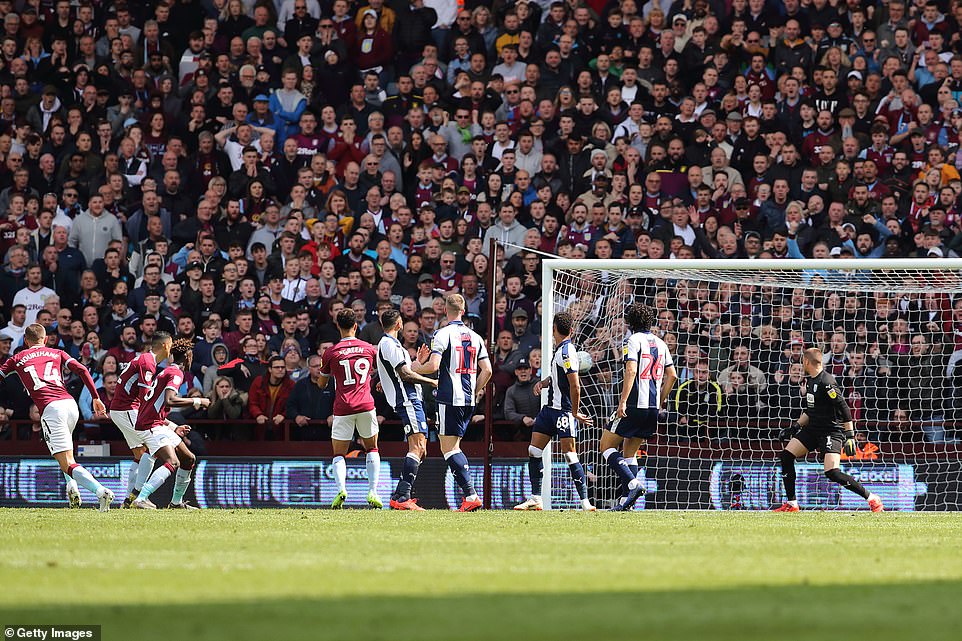 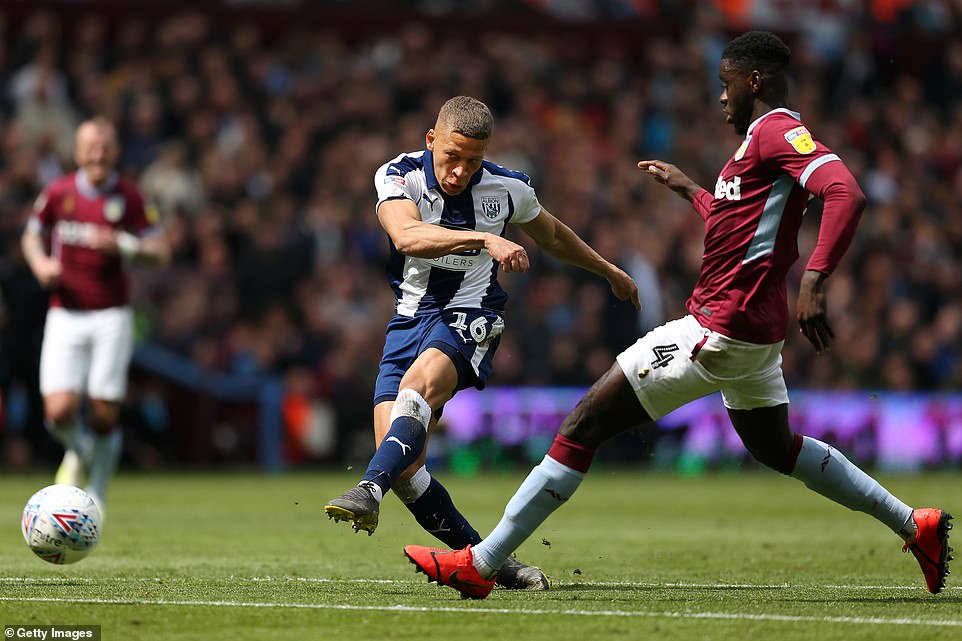 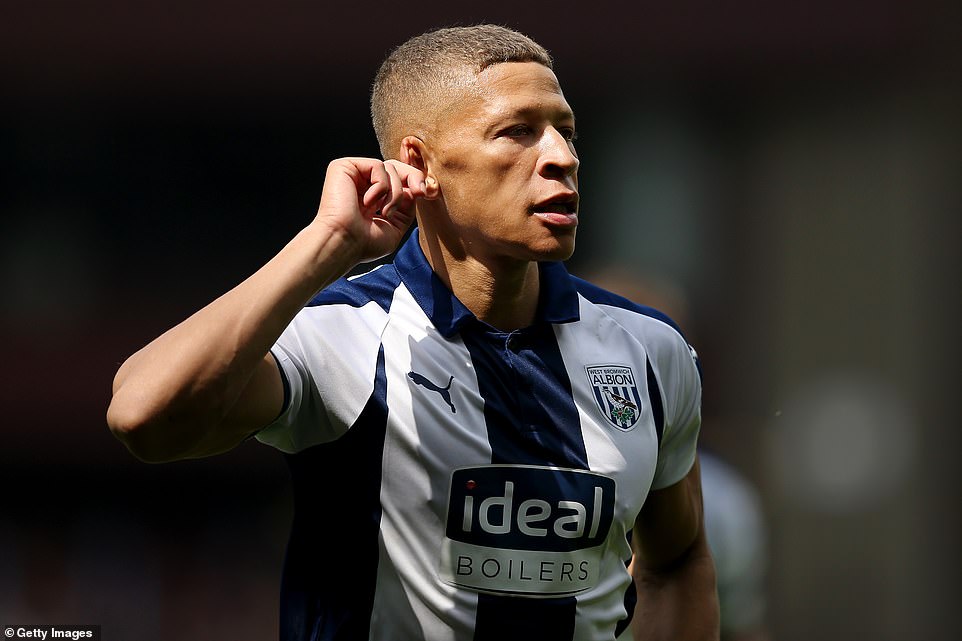 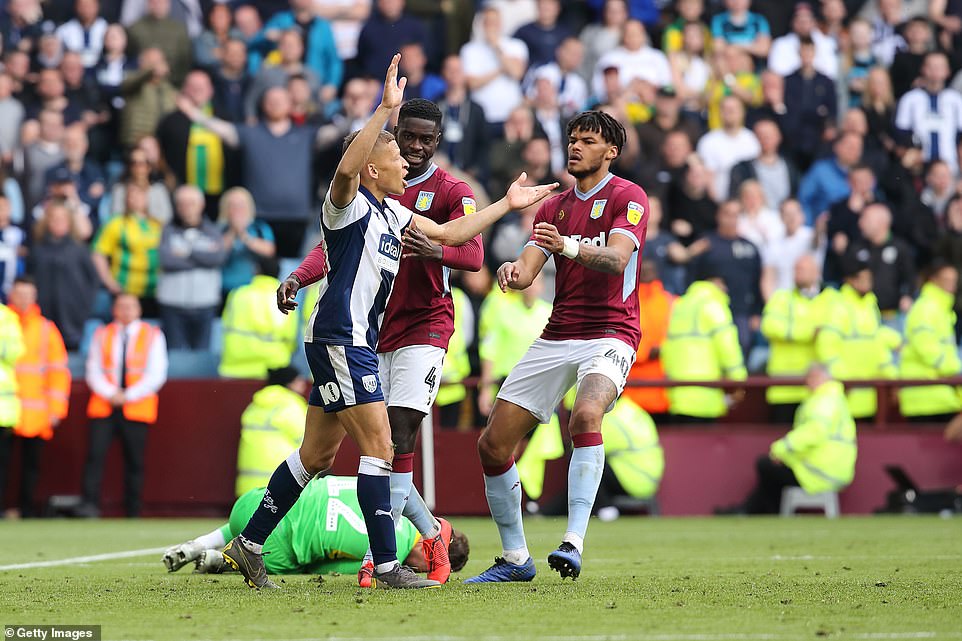 ‘We’re going there to win the game,’ said Villa manager Dean Smith. ‘That is how we’ve been playing and I don’t want us to stop doing that.

The stakes couldn’t be higher and Villa know just how much it hurts when the chance of promotion slips away as it did last year in the play-off final against Fulham.

They also know that not getting promoted this year could also result in losing Grealish. Super Jack, as he’s known round these parts, has developed into a creative midfielder capable of scoring and creating goals regularly.

He is integral to the way Smith’s side plays and so often starts attacks when he either collects the ball deep – as he did in the early stages of the game before being clipped by Stefan Johansen – or aims to provide gloss further up the pitch.

There is a reliance on Grealish and that is possibly why they sometimes appear so naive in attack. His team-mates and the supporters appeared to expect him to do everything here. Indeed, he did eventually but there were periods where Villa needed a different outball or someone else to take responsibility. Similar responsibility to what Smith reminded them off before they went on a 10-game winning streak that got them to the play-offs.

There is a certain irony, though, in Villa preferring to attack with pace and thrust when Glenn Whelan, sitting deep in a midfield three, lacks both and can be exposed for it. Cute passes look neat when they come off but when they don’t you can be made to look very stupid. And when Whelan’s took a bad touch after a couple of passes back and forth with Grealish, he gave the ball away to Gayle. The 28-year-old, who has scored 24 goals this season, was alert and burst forward before shooting past Steer. 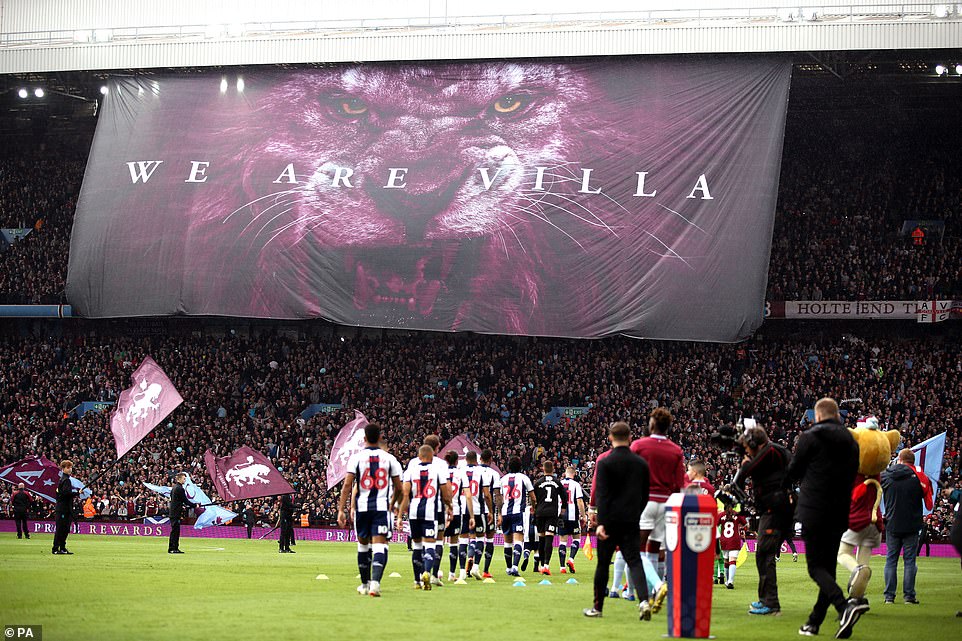 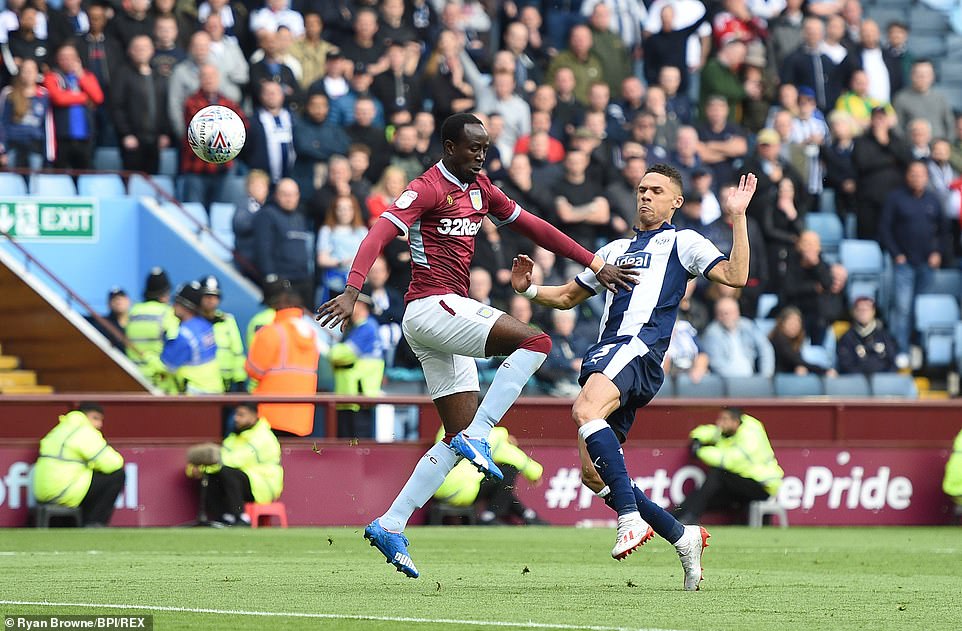 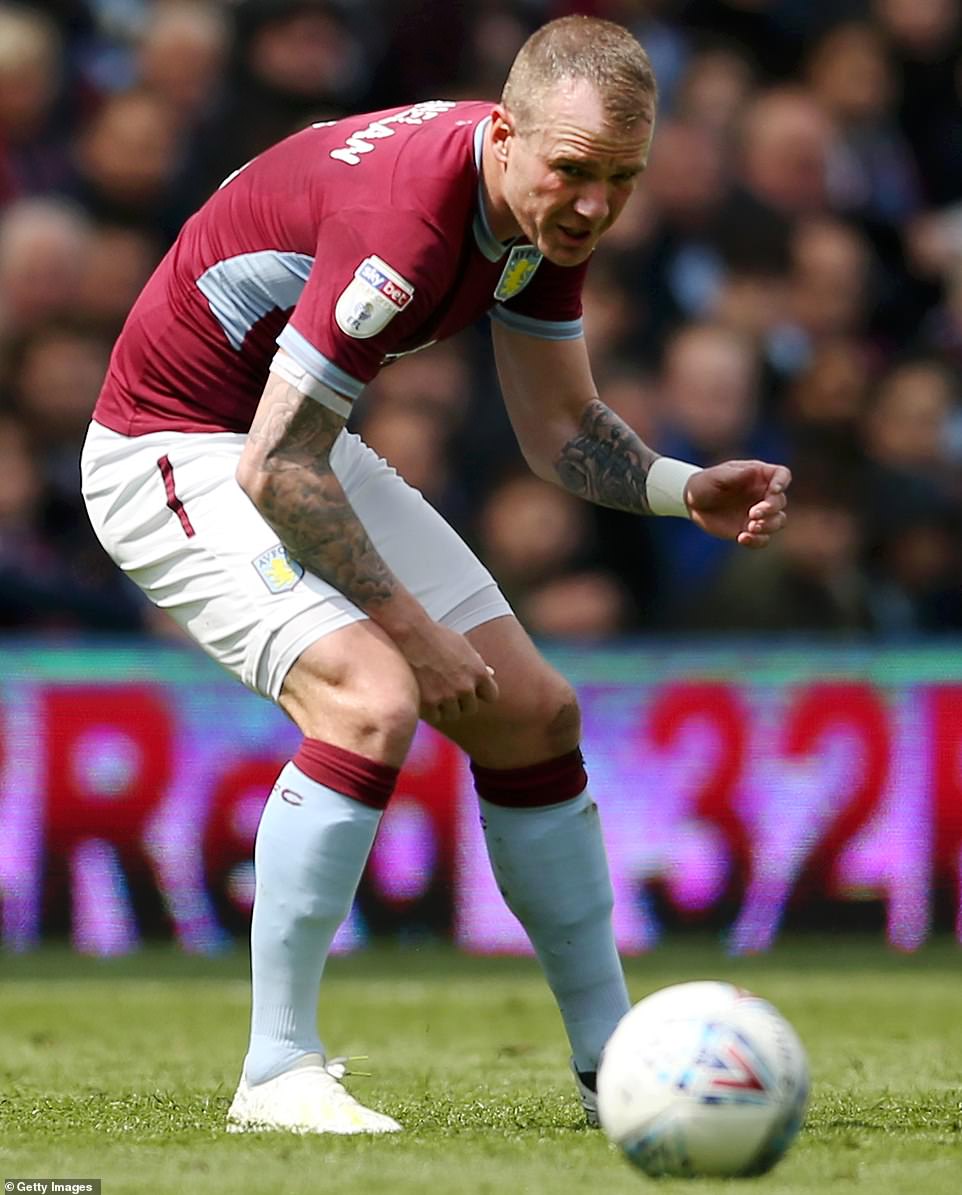 Whelan could only watch on as he failed to control a pass properly, allowing Gayle in to score the tie’s opening goal 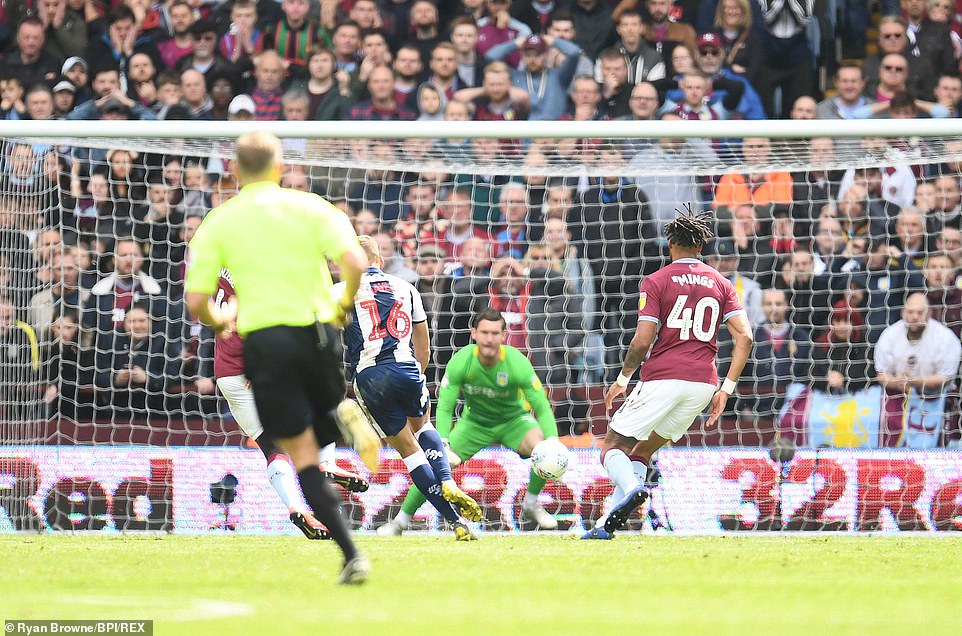 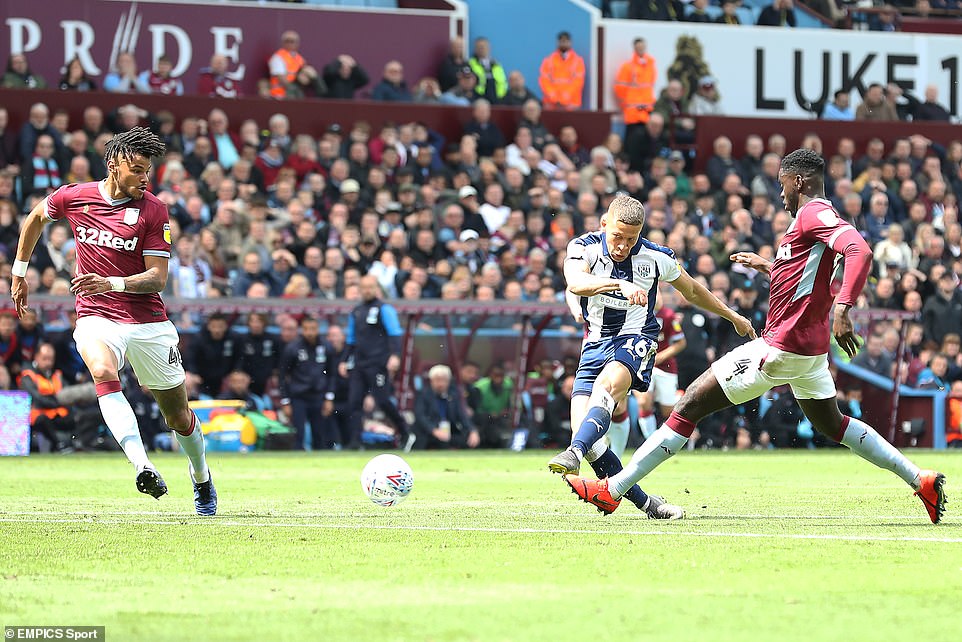 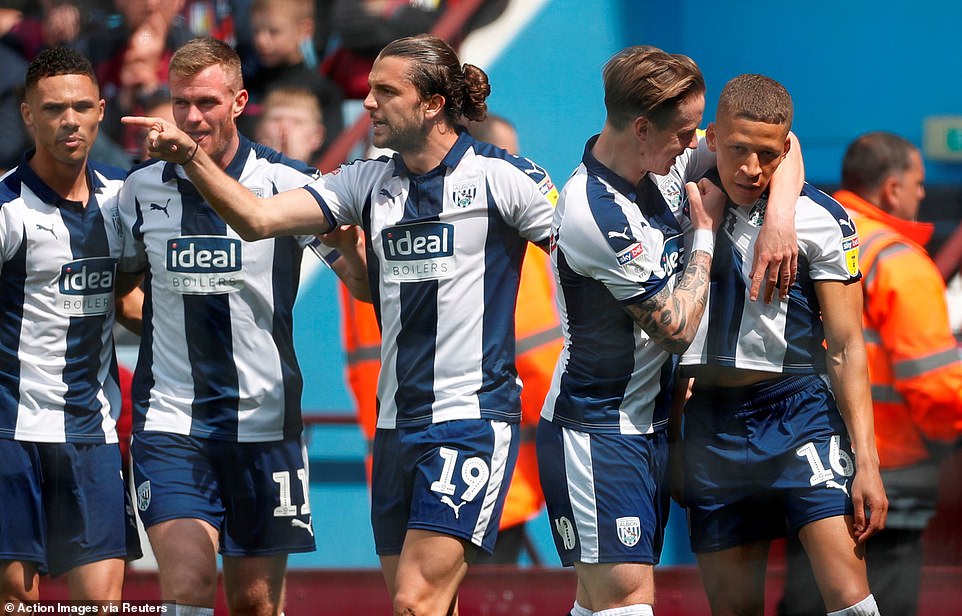 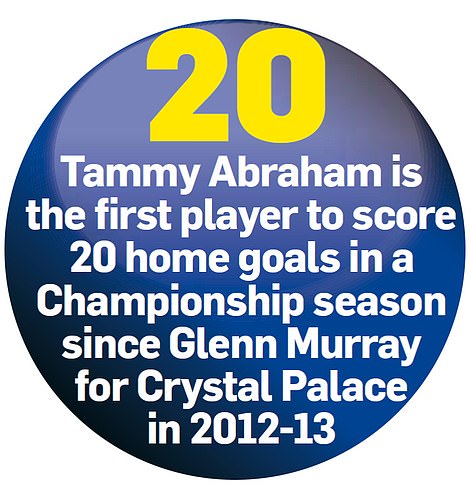 Villa’s response promised plenty but produced quite little for some time.

In the 30 minutes that followed West Brom’s goal, they were well in control.

They looked at ease on the ball. Grealish continued to be at the heart of the play, linking with Tammy Abraham while also connecting the rest of midfield.

At times they played with a back three with Whelan sitting in defence while Neil Taylor and Ahmed Elmohamady went forward.

It was overloading West Brom who didn’t look prepared to position themselves anywhere other than their own half.

They were also having to target Grealish and those who broke quickly through fear of Villa finding a way into their penalty area. 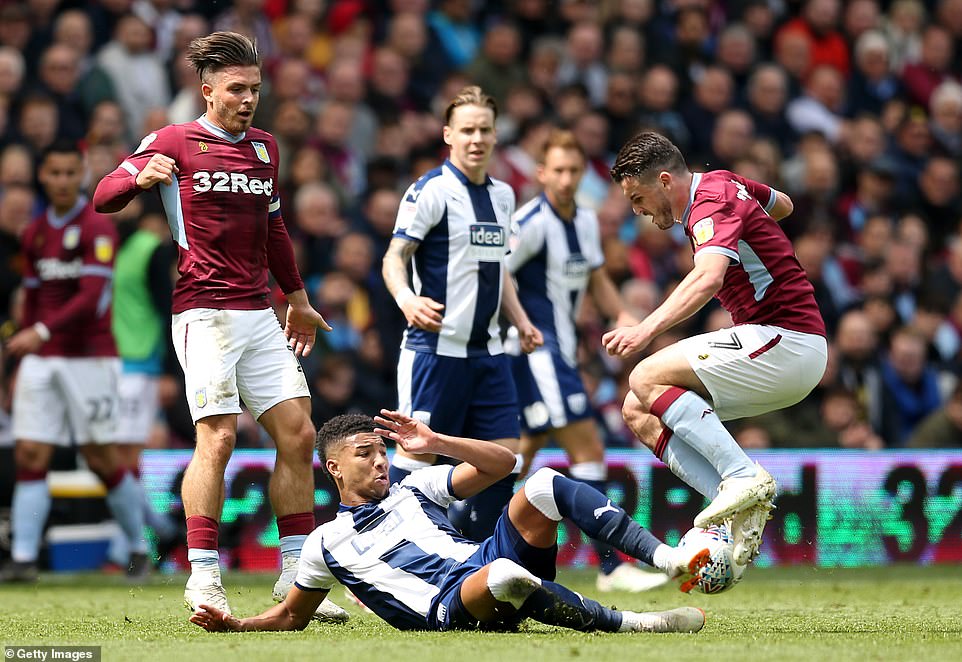 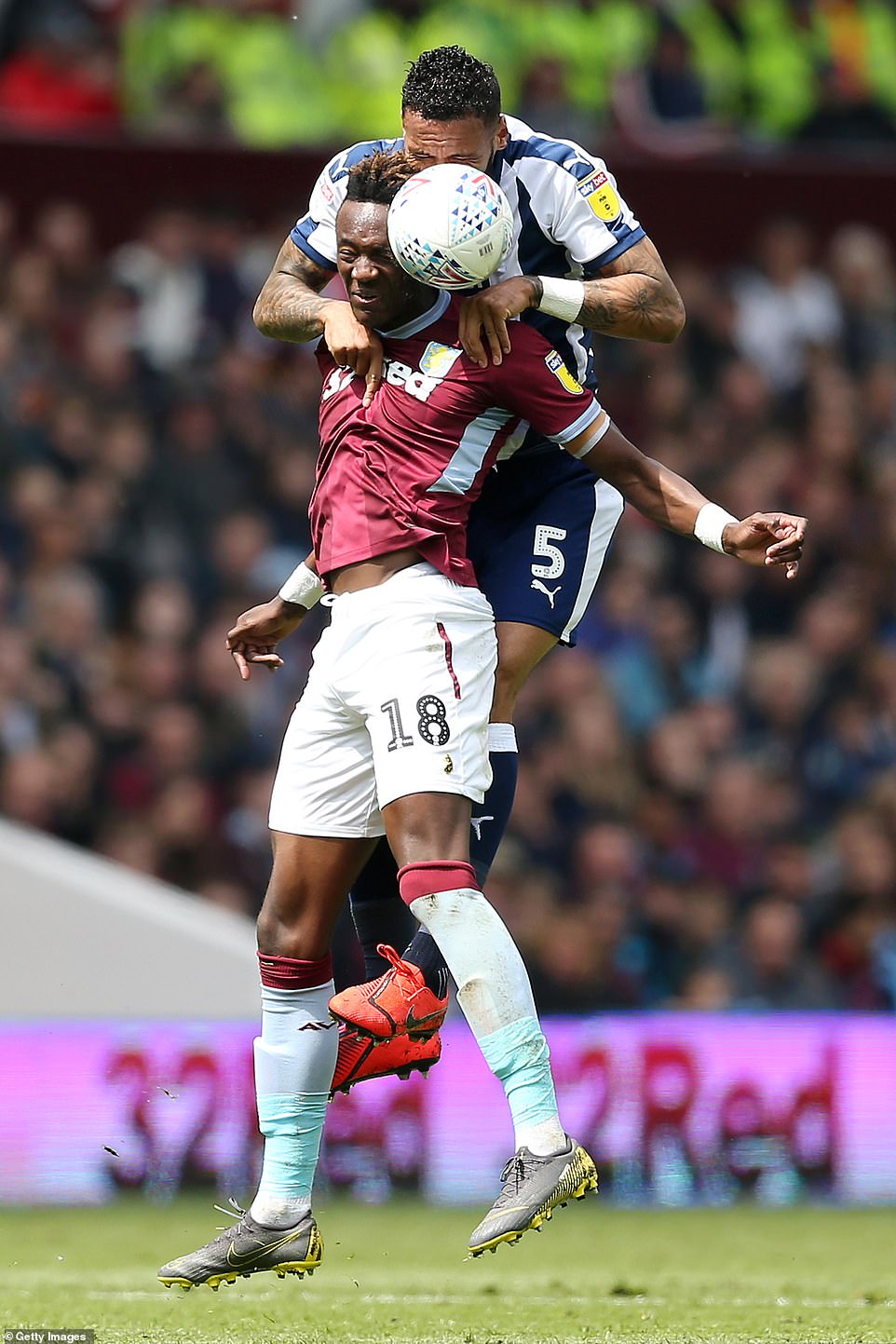 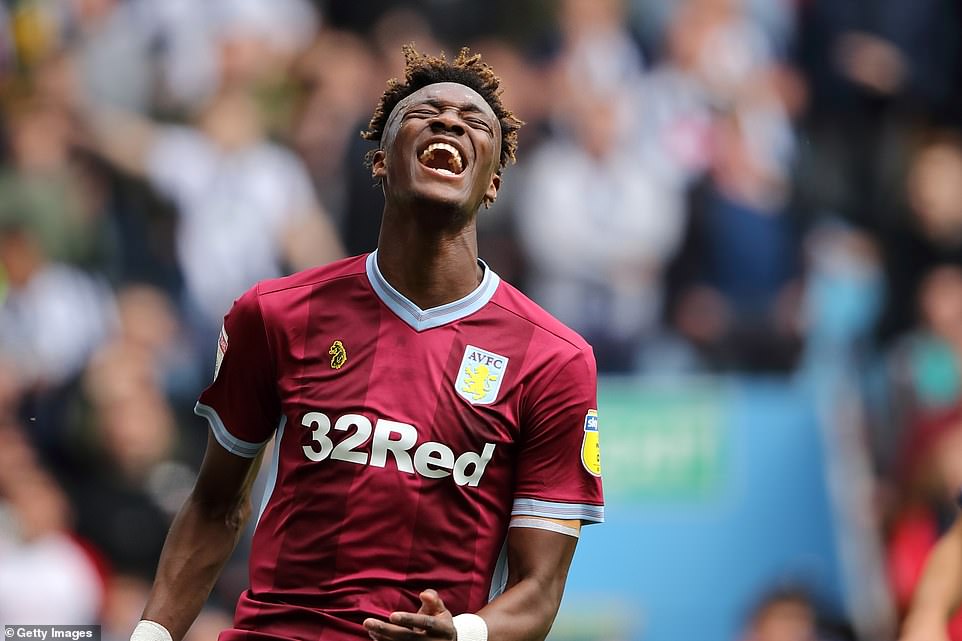 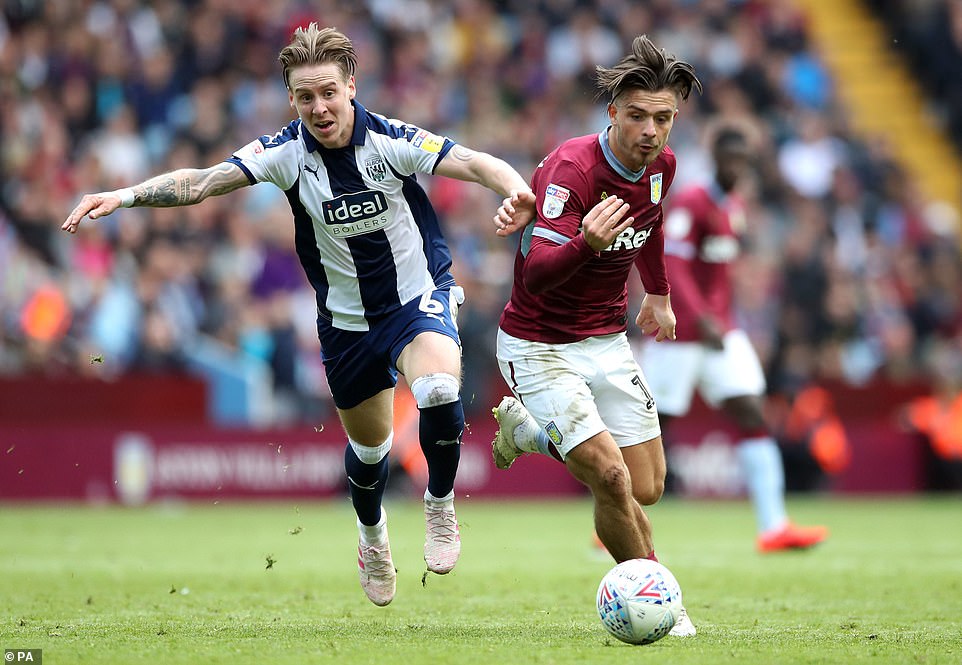 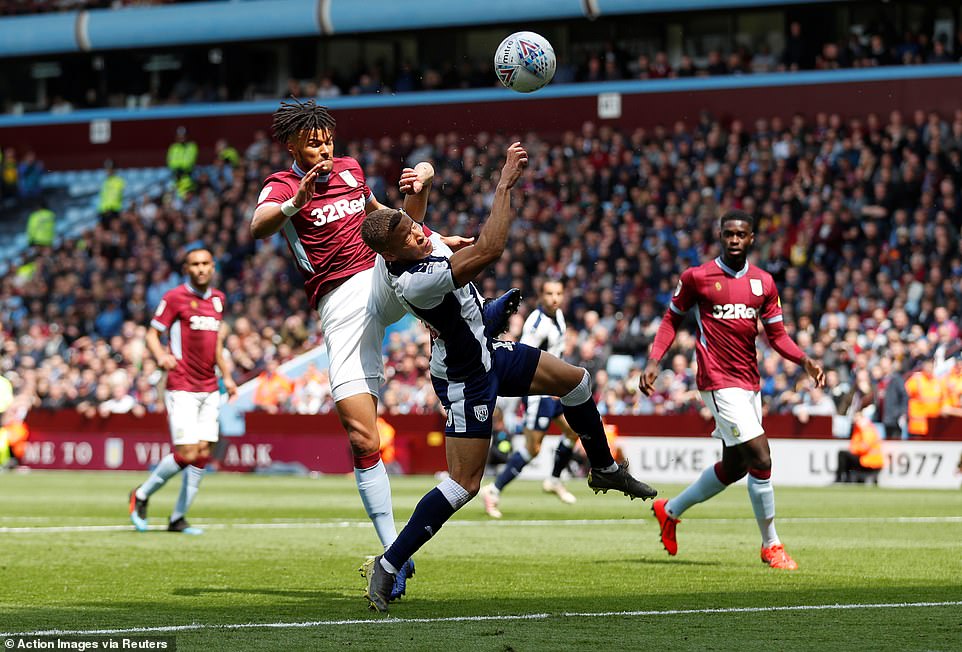 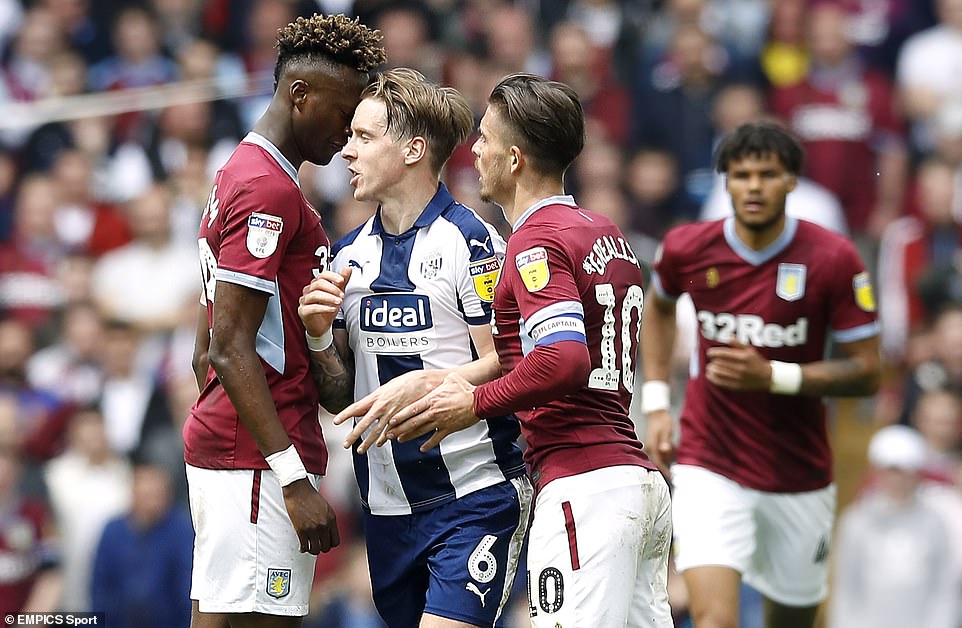 Grealish was being targeted more and more and it took several attempts by Johansen at clipping the Villa captain’s ankles for referee Graham Scott to warn him. Of the four West Brom players who were booked, Johansen never went into the book.

There were seven fouls in the first half and seven more came in the second. Grealish didn’t lash out – that’s not his style – no, but his determination to punish West Brom only grew stronger with every kick and shove that came his way.

And when Conor Hourihane’s scramble back to win the ball after Gayle tried to play in Jay Rodriguez, the home support urged Villa to counter and the ball eventually got to the feet of Grealish. 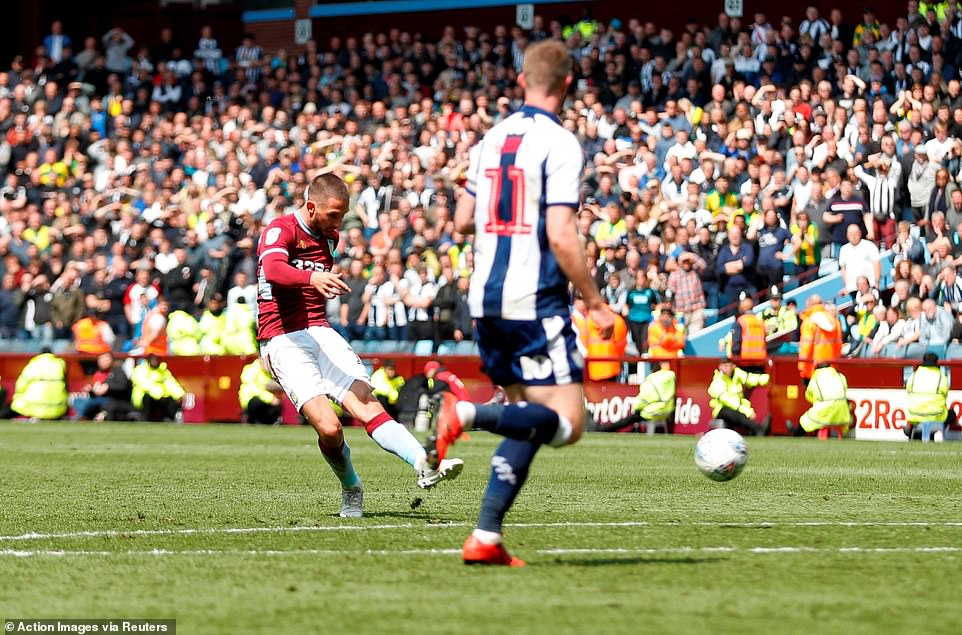 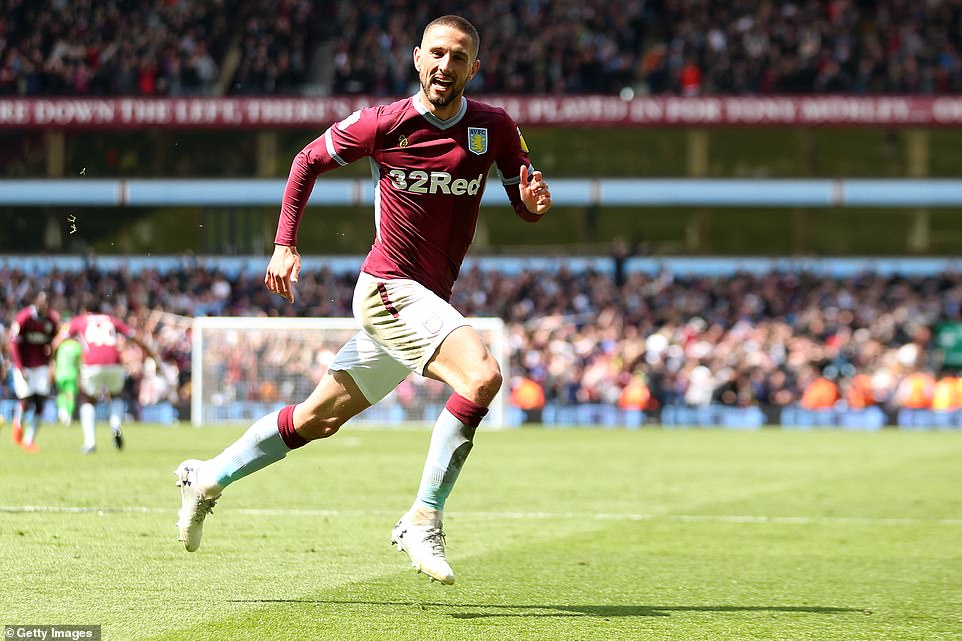 Hourihane, who was in contention to start the game, sprints away to the corner to celebrate with his team-mates and fans 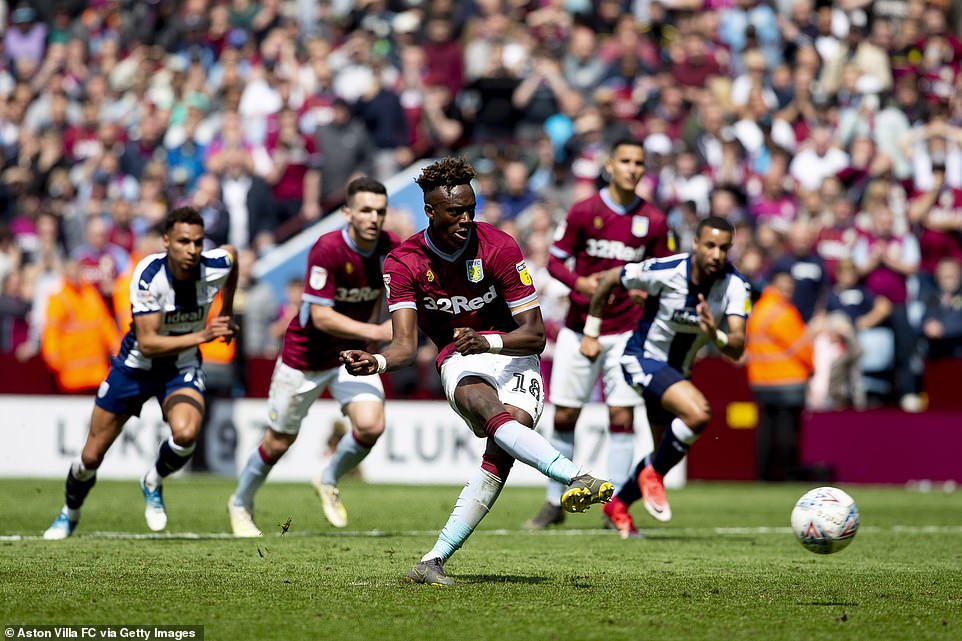 Abraham, who had struggled to have any impact on the game, picked up the ball and nudged Villa ahead in the semi-final 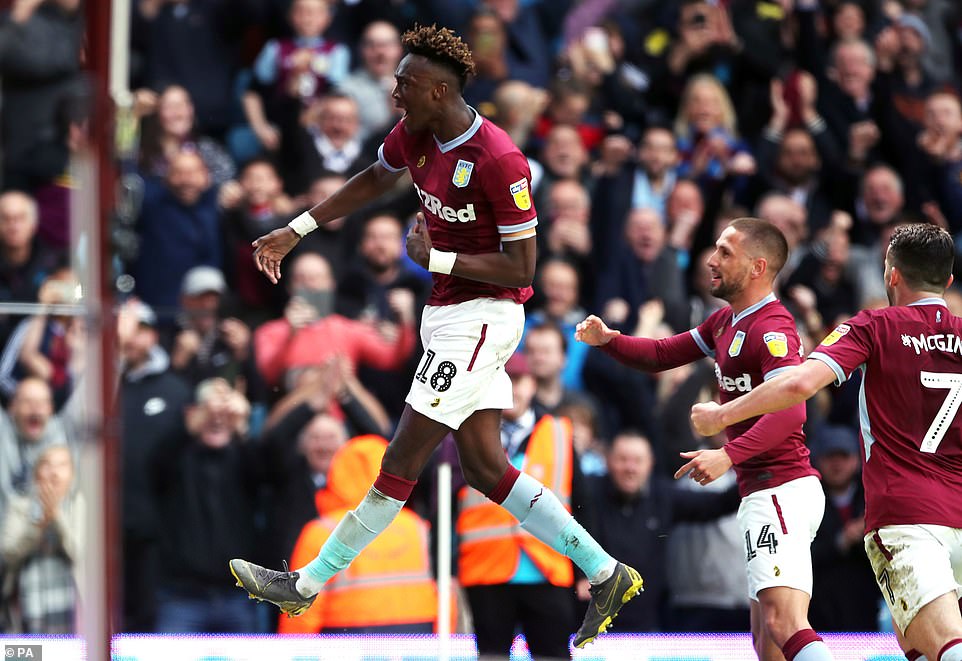 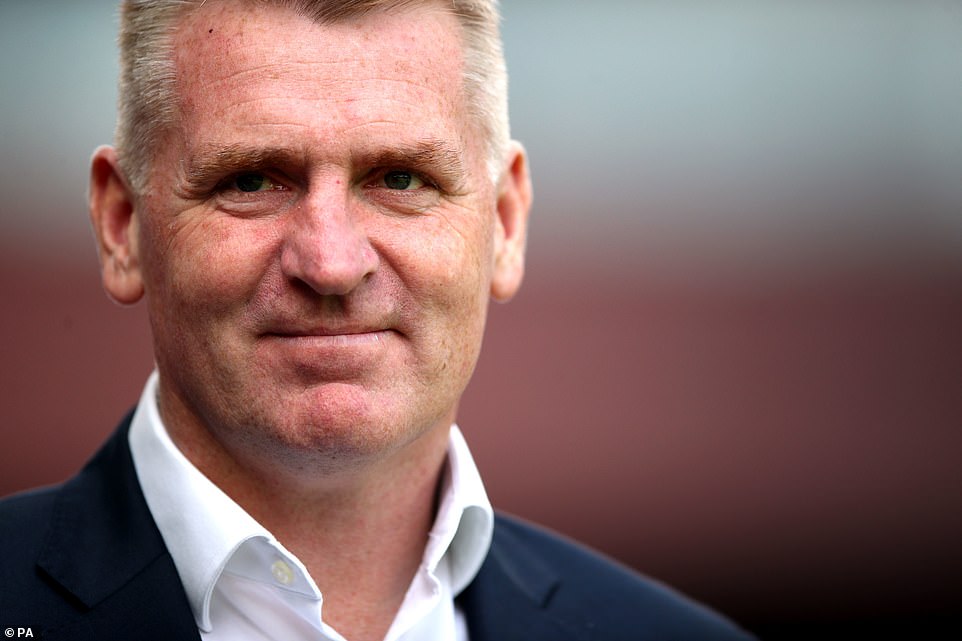 The 23-year-old initially ran into traffic in the West Brom box but then turned back and spotted Hourihane. He slid the ball to him and the midfielder struck cleanly into the corner. Goalkeeper Sam Johnstone didn’t move. Grealish wasn’t prepared for Villa’s resurgence to stop there. He sprinted into the West Brom box again and was brought down by Kieran Gibbs. Scott pointed to the spot and Abraham dispatched his penalty in the bottom left corner. His 26th goal of the season.

There was time for one last twist: Gayle’s sending off for a late challenge on Steer. It was silly and careless, and means a key component of West Brom’s attack missing for the second leg.

‘It’s a big blow for us,’ said West Brom caretaker manager James Shan. ‘But the beauty is we have 90 minutes to go and perform and turn it around.’