It was a simpler time. Both when we bumped elbows at the start of this interview a few weeks back and then in the recollections that followed from a wonderful character with a unique place in history.

Let’s get going with her Pyrex dishes, the spoils of victory and a snapshot of an era. There are only two of them left now in this lovely home of a champion in Congleton, Cheshire.

‘I broke one at some point,’ says Ann Brightwell, 78 years old, 56 years retired and going exceedingly well. ‘The original set was three dishes. Very useful those —I’ve had good use from them. They’ve lasted.

‘In those days that is what we got for winning races. Not at an Olympics, but just a normal race on the circuit. Or maybe you would win a tea set — I had a lot of tea sets. I was always giving them away. And saucepans. A different time I guess.’

They were the trinkets of success for Brightwell — or Packer as she was at the Tokyo Olympics in 1964 — when she became the first British woman to win a gold medal for running. Hers was a stunning and unlikely story, a tale of victory, of romance, of a myth that became a legend and now, quite possibly to some, forgotten.

But it is a delightful yarn and one that will take on a little extra relevance when the Games finally find their way back to Japan. The virus has nudged it back a year, but the summer of ’64 remains fixed in time for Ann.

‘I’ve lived around here for years and years,’ she says. ‘We all know each other and so the Olympics isn’t really something that comes up other than every four years when someone will ask if I’m planning on running. But I’ll admit, it is nice when it does come up.’

Sitting in her conservatory, with ribbons for Otto the dog in the next room but little on show of her life in athletics, Ann dives into a charming sequence of memories which will culminate with an 800metres gold medal and a world record that, rumour has it, was nearly lost to a shopping trip.

‘I was a PE teacher in New Malden in London back then, before going to the Olympics,’ she says. ‘Robbie was a teacher, too.’ 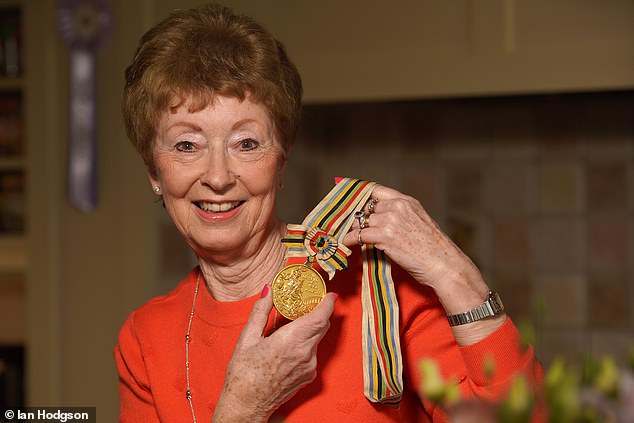 Now known as Ann Brightwell, she poses with the gold medal won in Tokyo when Sportsmail interviewed her shortly before lockdown measures were put in place amid the coronavirus

Robbie is Robbie Brightwell, Ann’s husband of more than half a century, and the father of their three sons, two of whom would go on to play for Manchester City. He was also the admired captain of the British team going to Tokyo and, like Ann, his fiancee at the time, he was expected to return with a 400m gold medal. He would become a key figure in what later unfolded in Japan.

But before all that, Ann goes back to what life was like for a female athlete in the early Sixties. ‘It was so different from now, especially for women,’ she says.

‘People thought you were a bit odd if you were a woman out running. If we needed to train on a local slope or hill or around the streets, then I would get wolf whistles or a bit of abuse. 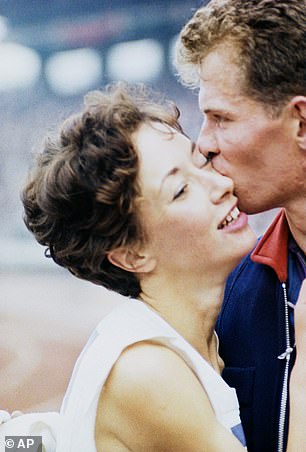 ‘Mostly people thought you were a bit strange.

‘There were only 12 athletics events for women in Tokyo and the 800m was the longest. They thought it was unfeminine for women to run so far.’

Like the men’s, Ann’s training was done around work. ‘The school were very good with me,’ she says. ‘But it was very tricky for any athlete in those days. We weren’t funded and full-time like they are now, and I actually think it was better the way we had it. One injury now or a bad few results and what can they do? So much pressure on them.

‘I used to leave home at maybe 7am, do a bit of speed work before school, and I would then do weight training at lunchtime and maybe a track session in the evening. That was basically how I prepared for Tokyo. It was really very different from now.’

In all manner of ways. While an indisputable argument could be made that today’s athletes are being deprived of earning opportunities and power by those running their sport, back then it was a far more severe landscape.

‘We would get a bit of kit from big companies like adidas if you reached a certain level and that was it,’ Ann says. ‘There was no money, no expenses.

‘If it was an international meeting, you’d get an allowance and maybe your second-class rail fare if you were very good. I can remember that one of the pole vaulters had an awful job getting his poles to White City in London and needed to go by taxi. Whatever the British athletics board was known as then, they wouldn’t pay his taxi fare.’ 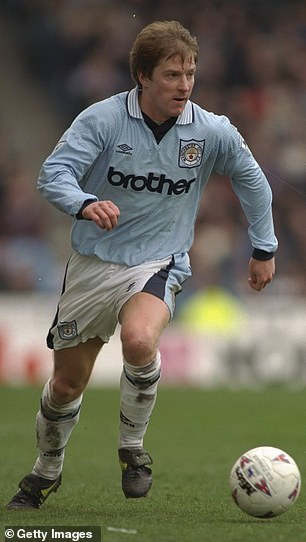 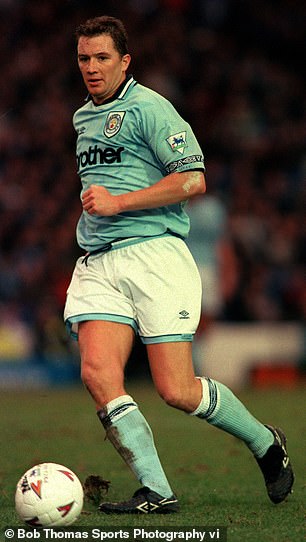 Ann and Robbie Brightwell went on to have three sporting sons, with two going on to play for Manchester City in the early 1990s,Ian (left) and David (right) Brightwell 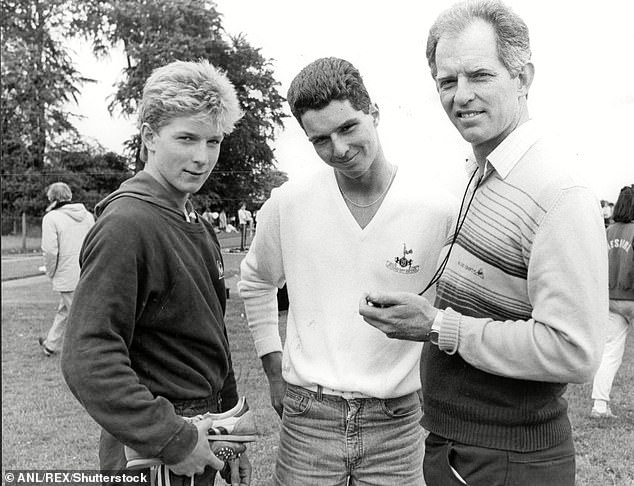 Pictured with his father Robbie and his brother Ian, Ann’s third son Gary (centre) followed in his parents’ footsteps by going on to become an athlete as a 400m runner 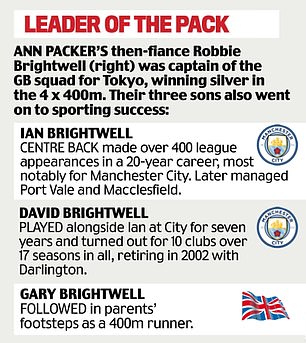 It was against that backdrop and culture that Robbie had what became a pivotal row with the British Amateur Athletic Board ahead of the Tokyo Olympics.

‘We had been flown to Tokyo second class and there was also an argument about the board taking the fees from television rights of a training camp and nothing going to athletes,’ Ann says. ‘Robbie took on the fight for all of us and it really affected him.’

Robbie, drained by the politics, would go on to finish fourth in the 400m, and having been the favourite, the disappointment was acute.

Ann, then 22 years old, appeared to be on a different trajectory when she smashed the Olympic record by more than a second in her 400m heat, and then when she broke her own new mark again in her semi-final. But despite going faster in the final, she was beaten into silver by Australia’s Betty Cuthbert, who broke the world record.

‘Even now, I look back and regret it a bit,’ she says. ‘She was just the better woman on the day.’

Out of that frustration grew something remarkable. Ann had been entered as the third of three British women to run the 800m but given it started the day after the 400m final, she didn’t much fancy it. No doubt that was exacerbated by the fact that she had contested the distance only three times — and not even once at elite level.

What happened next has slipped into athletics folklore. ‘It’s been said a lot that I decided I wasn’t going to compete because I was so fed up and had no chance,’ she says.

‘The story I heard is that I was instead going to go shopping with my room-mate Mary Rand (who had just become Britain’s first female athletics gold medallist in the long jump). It was so long ago who knows what I said?

‘I’m fairly sure I did say it because there are enough people who were around at the time who say I did! But to be honest, I can’t think that I would have actually pulled out. The main thing for me was doing it for Robbie. I felt so disappointed for him after all he had been through, with all that political business, that it spurred me on. I wanted to race for him and so I did.’ 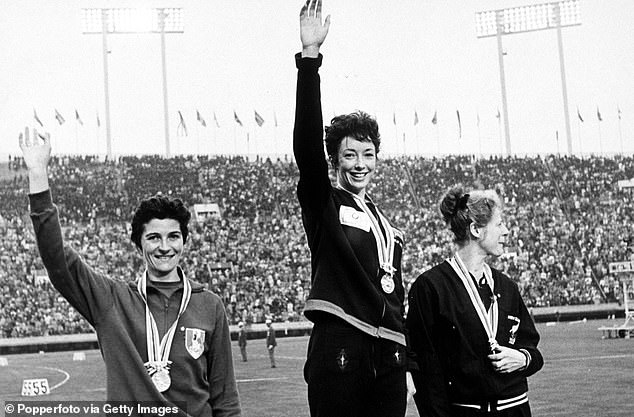 The early results were less than inspiring. Ann was the slowest qualifier from the heats in 2min 12sec and the second slowest of the eight who made it out of the semi-finals in 2:06.

‘I’ll tell you a secret,’ she says. ‘I didn’t even know where we were meant to start the races. I thought we would start an 800m on an arc like they do with the 5,000m or those longer events, but we were in lanes and I didn’t know where to cut in.

‘I had to ask one of the other girls. I was lucky she was honest.’

Ann laughs about it now. She truly had no expectations of what would follow in the final.

‘I had no idea what to do tactically,’ she says. ‘I just knew I had a strong finish because I had come from the sprint distances.’

How it paid off. She trailed in sixth at the bell and in rounding the last bend, was still five metres shy of the favourite, Maryvonne Dupureur.

With an incredible burst, the Brit passed the French athlete on the straight and set an astonishing world record of 2:01.1 in only her sixth race at the distance. ‘I’m not fully sure how I did it,’ she says. 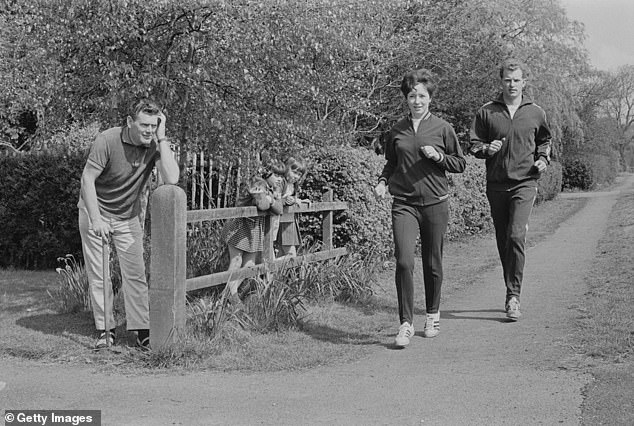 Ann admits that people thought she was a bit strange when she used to go running outside of her usual working hours. Pictured is her running alongside Robbie in May 1968

Once she passed the line, she carried on running straight into the arms of her fiance at trackside. As a package of performance and celebration, she became an instant sensation.

‘The reaction was quite something,’ she adds. ‘The Japanese could be quite reserved, so for me to run off the track and kiss Robbie became this big deal. It was all over their newspapers.

‘It was a lovely moment, because really I was doing it for him and for me.’

She celebrated with journalists in the Ginza district that evening and after one more race at an invitational event straight after the Games, Ann retired from athletics aged 22.

She returned home to start a family — she and Robbie married at the end of that year — and enjoyed the fruits of her success, such as they were.

‘I had endorsement work from Heinz — “Golden girl, golden beans” — and Bovril,’ she says. They helped her and Robbie furnish their flat.

‘That might seem different from what they make today but I am very happy with everything I have had,’ Ann says. ‘I left to start a family and looking back now, athletics was really a very small part of my life. But it was wonderful, too.’

To this day, 56 years on and for all the developments in nutrition and training, Ann’s time from that 1964 final of 2:01.1 stands 43rd on the British all-time list, which is remarkable.

Her place in the history of British sport is loftier still.

Shelvey says Newcastle takeover would be ‘good for the city’ but...