‘It was a bit of an anti-climax’: Ex-Fulham striker Adam Taggart warns Premier League stars that playing without fans can feel underwhelming after playing for Suwon Bluewings in South Korea’s K-League this month

By Tom Collomosse For Mailonline

Premier League stars will feel a sense of anti-climax when returning to action that may cause them to forget the importance of vital matches.

The English top flight hopes to resume next month with relegation and European qualification up for grabs – but the prospect of playing in front of empty stadiums, due to the coronavirus pandemic, risks dulling the players’ competitive edge.

Australian forward Adam Taggart was one of the first players to start again after Covid-19 forced the suspension of football in most countries, when he was part of the Suwon Bluewings side who took on Jeonbuk Motors behind closed doors in South Korea‘s K-League on May 8 – watched by about 3.5million football-starved fans across the world. 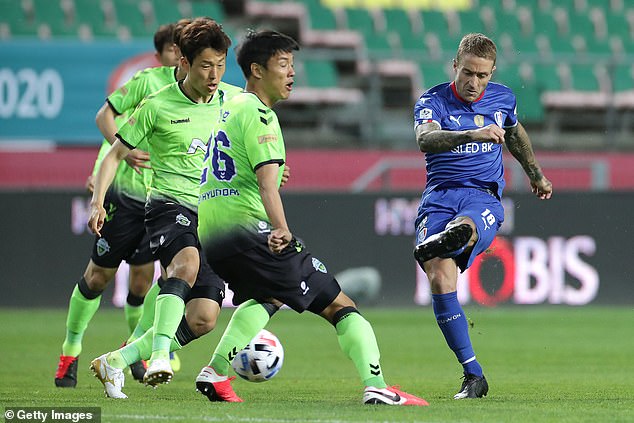 The ex-Fulham striker (right) was one of the first players to play football after lockdown, when his Suwon Bluewings side took on Jeonbuk Motors in South Korea’s K-League on May 8

‘To walk into an empty stadium and play a competitive match that was being watched all over the world was just a really weird feeling,’ said Taggart. ‘[It was strange] playing in front of an empty stadium but also knowing you’re playing for points and that the result will contribute to where you finish in the season.

‘It was a bit of an anti-climax. Most professional athletes would say the same thing. When you’ve got a crowd there it lifts the whole intensity of the game. It’s going to take a couple of weeks to get used to that feeling.’

This weekend, the Bundesliga became the first major European league to get the season going again, with the Premier League still in discussions about when the 2019-20 campaign can be revived. 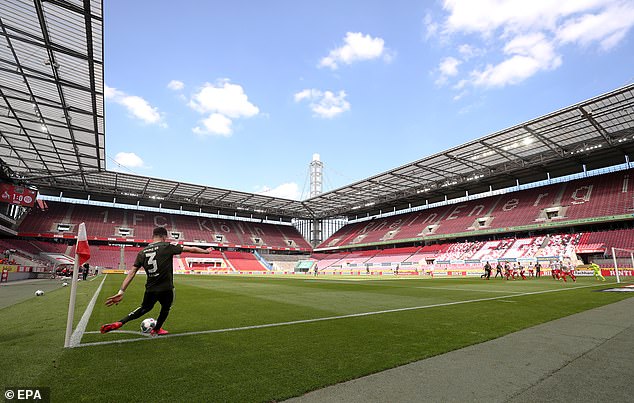 The K-League imposed strict social distancing conditions before restarting the competition, with handshakes and spitting banned and players forbidden from talking at close proximity to one another.

But Taggart warned that these warnings are virtually impossible to police. He told the BBC’s World Football programme: ‘Before the game it was a bit more stiff in terms of what was being allowed but by the end people probably just forgot about it.

‘Some people were shaking hands. The rules were there but they were not set in stone. It is like a recommendation not to shake hands or be in the group huddle but it’s pretty hard to administer.

‘I tried to keep my mouth shut as much as I good. For much of the game, everyone fell into silent mode.’

Manchester United ‘release 1,000 youth season tickets for next season in...